In Between follows the lives of three strong and independent-minded Israeli-Palestinian women who share an apartment in Tel Aviv.  Away from the constraints of their families and enforced tradition, they find themselves ‘in between’ the free and unfettered lives they’re aspiring to lead and the restrictions still imposed on them by their country and their families.

The narrative centres around 3 women, each powerful in their own way. Laila, a fiercely strong and successful lawyer hoping to finally find a man who understands her, Salma, a bartender and lesbian hoping her aspirations of becoming a DJ pay off, and Nour, a devout Muslim and student with a fiancée, longing for a simple life. The film is set in the underground scene in Tel Aviv and deals with themes of sexism, female friendship, femininity and sexuality, taking us and the girls on a whirlwind journey through the trials and tribulations that life as a woman brings.

Personally, it was a film that stirred something in me. I felt myself saying “YES” to so many points raised by the film, and I left the cinema feeling like something magical, important, and so incredibly significant had just unfolded before my eyes. 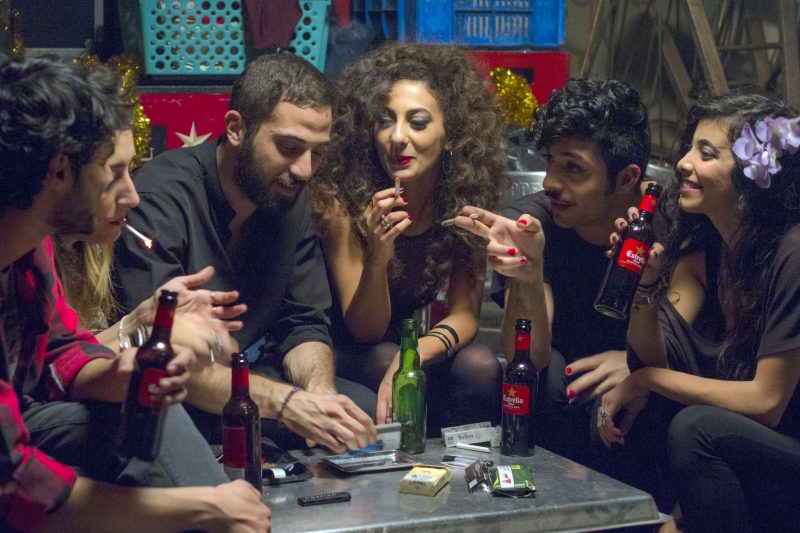 We chatted to the director of In Between, Maysaloun Hamoud, to get the low down.

Why did you decide to tell the stories of these 3 women in particular?

The simple answer is – I am one of those women. I’m from the community and generation you see in the movie, which is different to that of our parent’s and grandparent’s generation. Specifically, I’m talking about us as Palestinians/Israeli citizens. We’re the third generation of the Nakba – the 1948 Palestinian catastrophe. Previous generations have always looked at the national struggle as the top priority struggle and focused on that, but in our generation, with increased social awareness, it’s important to understand and be aware of how all these struggles come together. I am a woman and I am a Palestinian – and those two struggles are equally as important for both of us. This is why I made the film I did and this is where the background for the community and generation that you saw in the movie comes from.

I love how the film tackled huge problems with the patriarchy and sexism but in an understated, casual way that we as viewers could relate to. Did the fact that this was the first time most of the actors had been on screen help achieve that natural tone?

It’s very authentic acting – actually, perhaps we can take out the word acting, because all of the people in the film are a part of the life shown in the film and they live this life personally. We drew upon the stories around us and we face the same dilemmas as the women in the film, so I wanted to put people in those roles that could just be themselves without really acting. I wanted the naturalism of just being. So of course casting that way made the film believable – you can feel the characters and you’re touched so easily because you can see yourself in them because they are so familiar. Having this cast was purposeful and definitely an advantage. While [for some viewers] the film shows a different culture, the issues are the same for everybody all over the world.

What kind of reaction did you receive for the film across the world? Was it varied depending on location or did you find it was universal?

It’s absolutely universal. It didn’t matter where the movie was screened or who the audience was, the reaction was just the same from people watching in the US, in Europe, in Latin America, the Far East or in Africa. People in places all over the world suffer from the effects of the patriarchy and from lack of women’s rights. We know that there is injustice all over, so it wasn’t surprising to see that there was a really strong reaction that stretched between all the spots that the movie was released in. I can definitively say [that this success] wouldn’t have happened if the stories weren’t really authentic – the stories made it universal.

That reminds me, I watched an interview you’d done where you said that “the patriarchy has many faces.” I thought that was a brilliant description. Could you explain what you meant for the benefit of our readers?

The men in the movie are examples of the different kinds of patriarchy; they all have different backgrounds but in the end, all of them act the same towards women – they want to control us. Although Nour’s father, of course, is a good example – just being how a father needs to be without the patriarchal stereotype. When I say that the patriarchy has different faces, I mean that there are places in the world, like the US or Europe, where it appears that [men] are less conservative and society less patriarchal than in the East. But when you look at the statistics and facts, and of course at campaigns like #MeToo, you can see that it’s just [a mask]. It’s just a hypocrisy – statistics show that women are considered unequal to men in all aspects of life; salaries, jobs – you name it. It doesn’t matter really if you are European or if you are from the U.S, the Middle East or the Far East, at the end of the day men who act badly towards women can be found all over.

The film has been hailed as a ‘feminist Arab awakening’ by critics – how does that make you feel?

I’m so proud that the film has been called that, especially in such a short space of time. It’s very important, but I have to say that the struggles shown within the film and the reactions of the women existed well before the movie. A lot of women struggled and still do struggle for their rights, and the movie just talked about things in a different way and managed to connect to more people. I don’t know why, really, but I’m very proud to be in that spot.

You’ve been issued a fatwa for making the film. What do you think it was about the film that angered those who rejected it?

The fatwa came in an effort to stamp out voices that conservatives considered shocking, and to try to shut down the movie because they were frightened about what it said. Those conservative and religious men were shocked because something like that had never happened before – girls coming and holding up a mirror to their faces. It wasn’t nice for them to see that their reflections were ugly. The fatwa came at that time as a way to brand the movie as haram and forbidden.

I think it was very brave of you to make the film. Do you have any advice for writers who want to tell a story that they know will cause upset, or that will offend?

With respect to all creators and filmmakers, I really think that to be yourself and be connected to your authentic voice, and your truth, that it’s important to not try to be somebody else or to please the audience or to be loved. Everybody wants their work to be loved, but it’s more important to stick to your own truth and then you will get your respect and appreciation. That’s the creative process I really believe in. 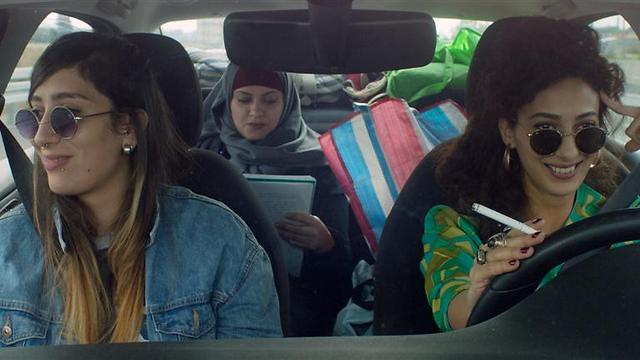 I’m very proud to be one of some Palestinian female directors. Of course, when I say Palestinian I mean in all of Palestine – me as a Palestinian who is an Israeli citizen and Palestinians who are from the West Bank or Gaza, as well as Palestinians from all over the world. We have a few female directors and I hope that there will be more. It’s not just me, but I think I am actually the youngest one.

One question we ask everyone we interview is if you could go back in time, what advice would you give to your 16 year old self?

Wow teenage times – it’s tough. It was really tough time for me at that age. I look back and I can see a really miserable teenager. I think it was the conditions I grew up in that made that time so tough. I grew up as a child in a liberal space in a town because of my father’s job, and then right in the middle of the tough teenage years, we moved to a village, which was more traditional and conservative. That dissonance made it more tough than usual. I would maybe advise myself to be more patient – and to remember that it will end. Although teenage years are a very revolutionary time – you wanna change everything around you, so who knows.

I’d just like to add that I am so pleased about what happened with the movie in the UK. The reaction and success has been very surprising and I’m so glad the audience liked it. Thank you very much for talking to me, I really appreciate it.

You can watch the trailer for In Between here:

You can buy In Between on DVD from the 29th January in the U.K.