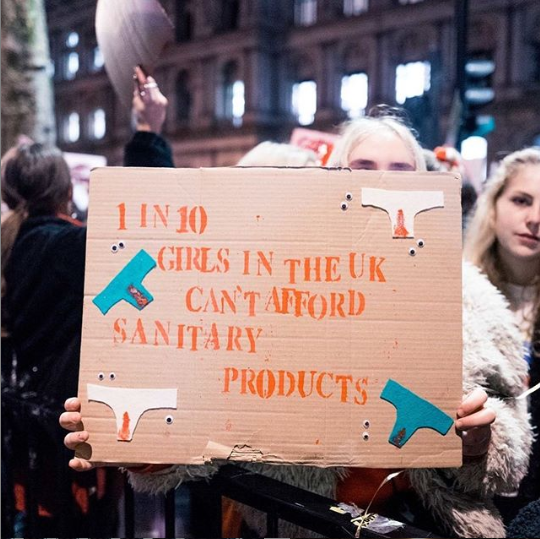 Launching a new video that hammers home the shocking truth behind period poverty in England, Free Periods have launched a new campaign and they need your help.

It’s been over 4 months since the Scottish government made the powerful decision to end period poverty in schools, universities and colleges by offering free sanitary products to students. The Welsh government, earlier in March, have also made the integral moves in ending period poverty by tackling the issue with a £1 million fund. However, England is still yet to address the issue that effects young women and girls missing out on their education every day. Simply because they can’t afford sanitary products.

In the new video for #FreePeriods the reality of this is no less than striking. “I once Sellotaped tissue to my underwear because I didn’t know what to do,” states a young girl in the clip. “I wrapped a sock around my underwear just to stop the bleeding because I didn’t want to get shouted at,” adds another. The reality of young girls struggling to not miss out on their education due to not being able to afford sanitary products is real in 2019. A tenth of schoolchildren in the UK cannot afford period products and 49% of girls have missed an entire day of school because of their period. This is resulting in young women or girls either improvising with embarrassing at home solutions or just simply missing out altogether. The short film, produced by Emmy award-winning filmmaker, Lina Plioplyte, features ten girls from schools in London, sharing their experiences, a place in which 80,000 women and girls are affected by period poverty.

THE FREE PERIODS FILM IS HERE !!! To mark the launch of our new legal campaign, Emmy award-winning producer @lina_land has created this incredible film, highlighting just how much we need YOUR help to fight period poverty in the UK. Please support us by sharing this film, and getting involved at the link in our bio. Be a part of this change. freeperiods.org/ #FreePeriods

Amika George, 19-year-old university student, who founded the #FreePeriods campaign is calling out for period poverty to end in England, once and for all. In partnership with the Red Box Project and with the support of The Pink Protest, #FreePeriods has launched a new legal campaign to ensure that no child misses school because they can’t afford pads of tampons. The CrowdJustice campaign is an online push to raise £10k in 30 days that will push for all schools and colleges in England to provide free menstrual products for all students who need them.

Let’s make sure that in 2019, period poverty becomes a thing of the past.

You can donate here  and read more about #FreePeriods here.

Read our GRL Talk with Amika