Ask any young woman and she will probably tell you she’s had that moment. With Dr. Google keen to proclaim that anything from indigestion to a headache is a symptom of pregnancy, it’s little wonder the thought often crosses a woman’s mind. What would you do if, unbeknown to you, your contraceptive pill had failed and you were three months away from becoming a mother?

Meet Abby. In 2018, she graduated with a Performing Arts degree and set off traveling the world with her long term boyfriend. By October 2019, she was giving birth to her son, Riley, having discovered that she was pregnant just over three months earlier. Abby, 22, and boyfriend Stephen, 29, had made pit stops in Sydney and nearby beach town Coogee, before heading to the Australian outback to complete the mandatory 88 days farm work required to obtain their second-year visas. It was here that Abby would discover she was almost six months pregnant.

“It was a shock to discover that I had been doing 12 hour shifts of manual labour, including heavy lifting, when I was five and a half months pregnant,” says Abby. “We’d been staying on the farm for five months when I found out, so I was proud of my body for coping!”. Like two thirds of British women aged 20-24, Abby was taking oral contraception, or ‘the pill’, when she became pregnant.

“Some mums have almost nine months to mentally prepare for becoming a parent, but as I only had three and a half”

“For those young women taking Microgynon – I’m not a great advert!” She laughs. “The pill lets you decide when to have breaks, and I was advised that I could safely take it continuously to avoid having a period altogether. This was great when I was in Australia, as I was always in a bikini!”. After a while, Abby noticed “a hard bump which wasn’t going away” on her stomach. It was her boyfriend who suggested she take a pregnancy test. It came back positive. “I wasn’t noticeably ‘showing’ and I hadn’t had any other symptoms, so I assumed that I couldn’t be very far along,” she says.

But after a private scan confirmed that Abby was in fact 22 weeks pregnant, the couple found themselves booking flights back to their hometown in Northern Ireland and preparing to become parents. Now, holding baby Riley and smiling, Abby says she was strangely calm in the days that followed. “Weirdly, there was no emotion from either of us when we first found out – no worry, no anger or anything,” she says. “We just accepted it and got practical: started to look at flights and getting the things we needed for the baby. Some mums have almost nine months to mentally prepare for becoming a parent, but as I only had three and a half, it was tough at first. I wasn’t frightened though. Being on the pill every day and still getting pregnant made it feel like fate somehow, and soon the feeling of love outweighed any nerves.”

Riley Adam Duffy McGillian was born on 31st October 2019 – “my little Halloween baby!” – grins Abby. Initially, doctors estimated the due date as 6th November, but after the fluid in Abby’s womb reduced she was told she would need to be induced earlier. “The doctor told me that he would like me to come in tomorrow and have the baby – as if he was just booking me in to get my eyebrows done!”

“I feel like a version of myself I never knew existed”

Being a young woman in the age of Instagram is no picnic at the best of times. We are constantly bombarded with images of the ‘ideal’ body, and under pressure to juggle a thriving social life, career and relationship. Add a new baby into the mix, and it’s even tougher: “I do struggle with my body image after being pregnant. Like most people in their twenties, I spend lots of time on social media. Scrolling past ‘influencers’ and seeing their bodies and lifestyles can be really toxic” admits Abby.  “I try to remember that, of course, my body isn’t going to look like that – I’ve just carried another human for nine months!” 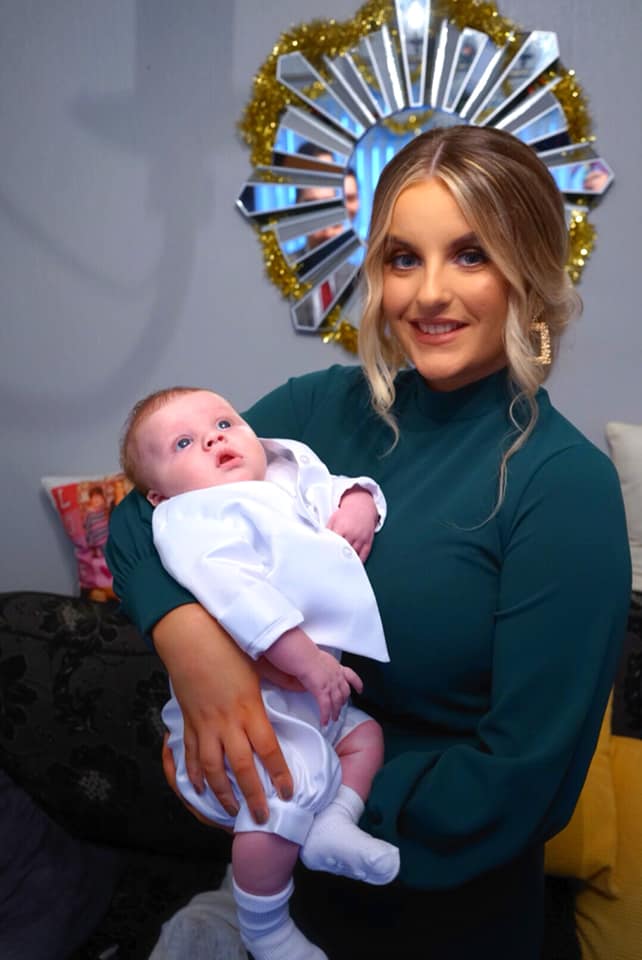 Before becoming a mother, Abby was living the typical life of a young woman: she enjoyed going out and socialising with her large group of friends. Is she struggling to adapt to the change? “I do get serious FOMO every weekend because I’m the only mum in my group of friends so my lifestyle is very different,” Abby explains. “I think it’s really important to have a night off sometimes to have fun, and balance that with being a mum. I don’t like the idea of going out and being hungover as I don’t think that’s fair on Riley, but ultimately I’m still a young woman. Just because I’m a parent doesn’t mean that I have to take up knitting and rush home for Emmerdale – I’m still me!”

Speaking to Abby, there’s no doubting her love for Riley. Hers is one of the situations which many young women fear the most, yet I’m struck by the calmness and bravery with which she seems to be approaching the unexpected path her life has taken. “Today, I feel like a version of myself I never knew existed,” she explains simply. “I have suffered with depression in the past, and sometimes wondered ‘why am I here?’, and now I know. I’m here to raise Riley and help him be the best version of himself.”

When I ask her if she has any advice for other young mums who find themselves in her situation, her answer is heart-warming and seems wise beyond her 22 years: “enjoy the little moments. Being a young mum is scary and sometimes it can be easy to worry so much that you miss the little milestones that you and your baby are hitting all the time.”

“As much as you might try to plan your life, it doesn’t always happen that way. And that’s okay.”

A message for all of us to live by, I think.