Fuck Being Humble is a mentoring platform which was created in 2018, following Stefanie Sword-Williams’ frustration of “seeing great talent go to waste” when people were doing great things, but not knowing how to promote them. In this installment of our GRL Talk series, Stef shares her key to confidence in and outside of our careers, how she’s fighting the need to be productive in lockdown, and the value of being “fucking relentless.” 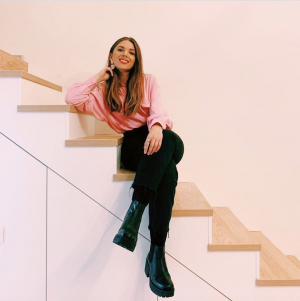 What is Fuck Being Humble’s origin story?

I felt like I knew a lot of people making waves in the industry, but every panel was made up of men – CEOs over the age of 40. Even when there was a woman, she was 50, with many years of experience. There had to be a reason why there wasn’t representation [of other demographics] and why [other] people doing and making amazing things weren’t being spotlighted.

When I first moved to London, I was quite lonely and would spend most of my weekends coming up with ideas whilst listening to 90s R&B and hip-hop playlists. As I was listening to Missy Elliott and songs about working and money, I thought: “wouldn’t it be great if I took that kind of attitude and applied it to some sort of self-help promotional project that helps people with their careers?”.

We have three event presentations: Let Me Blow Your Mind, Ain’t No Shame and Bitch Better Have My Money, which tackle the areas where people need the most help when it comes to self-promotion. They cover identifying your voice, sharing your work and claiming the money you deserve. The first ever event attracted about 50 people, the second, about 60 or 70, and then after a few months it was up to 160 attendees. All organic, no paid spending – just people finding our social media and hearing about it.

Why do you think we’re so afraid of self-promotion?

Because we care too much about how other people perceive us and don’t focus enough on the benefits that self-promotion can bring. It’s also societally, and culturally, frowned upon. We’re always encouraged to be more humble, more modest about our work to get it noticed –  but I just don’t believe that.  I think the way that the entire world has been encouraged to be humble overtakes people’s ability to see and share their own skills, and that ends up being problematic.

So the idea that “hard work will speak for itself” is a myth you want to bust, then?

The creative head of Nike isn’t just going to Google your name and find your website and everything you’ve been doing. Of course, the work has to be good in order for it to shine through – but you need to put yourself on the map. You have to make yourself discoverable, and spend as much time investing in your reputation and your profile as you do working in order to be seen.

Are there any secrets to owning it, or is it a process?

Some of the stuff I’ve done is ‘risky’, and actually I’ve managed to make it through it – so there’s got to be something [in that]. There’s not necessarily a secret sauce. Self-confidence is the ability to do something with or without the skills, and I feel like I have a strong sense of that.

When I spoke on BBC, I was asked: “why do you think men are better than women at self-promotion?”. I said: “I think that men are more confident and women are more honest.” And that’s potentially where we go wrong – being self-deprecating and not realising how good we are, when a lot of men wing it. They blag it, whereas we spend the time worrying we’ll get caught out. That imposter syndrome is so strong in a lot of women.

Where does your personal confidence come from?

I’ve honestly just been thrown in at the deep end so many times, I can’t tell you. I’ve had to learn how to swim back up, and every time I’ve done it – maybe not with the most grace or best outcome, but I think I’ve managed to build that confidence through my lived experiences of putting myself out there.

Also – saying yes to things and not overthinking them. I often champion the phrase I coined “act now, worry later” because when you act, you usually end up figuring it out somehow and don’t end up having to worry later.

Have your contributions to changing the landscape of self-promotion also changed you?

When I started seeing the impact of what I was doing, it gave me such a warm feeling inside and one of purpose, so naturally I felt more confident knowing I could help people.

Being hyper-aware of people’s emotions when it comes to their image and self-promotion, and actively listening to that is definitely something I’ve strengthened since doing this. I’m more empathetic to people and what their barriers might be. I started this journey thinking I could just tell everybody how it was done and they’d just implement it, but it isn’t that simple. People really need constant support and reminders that they are good enough, so now I observe behaviours and ways of thinking much more to be able to tackle and encourage different people in different ways.

Fuck Being Humble encourages us to start sharing what makes us stand out – what makes you stand out?

My boyfriend often jokes that my tombstone will read “fucking relentless”,  and he says that’s because of my tenacious attitude. I think it’s because I don’t really stop until I get shit done. I will deliver on what I say, and I think that makes me a reliable person in that respect.

How are you fighting the pressure to be constantly productive during lockdown?

I’m the world’s worst person to ask because I struggle to switch off at any time, but I just think everyone has to take it at different paces and stages. Having just taken Fuck Being Humble full-time, I’m currently battling with the fact that this was meant to be the time when I grew my business, and a lot of that momentum has been taken away.

I value doing things from a place of passion and leaning into that excitement you feel when you’re working on a project and burning the midnight oil because you just love it, not because you have to. That’s healthy, I think, to use the time to commit to things that make you feel that way, whatever they are.

It’s really a balance. I’m trying to take breaks, but I’m a small business trying to survive during a pandemic. I’ve been having really leisurely mornings and then doing four or five hours a day of focussed, solid work, and I’ve found that helps. We just need to be very gentle and very compassionate with ourselves. You have off days and you have good days – there’s no one size fits all.

How can we balance unapologetically celebrating our achievements with showing ourselves kindness if things don’t go well?

I’m a bit of a tough-love mentor and believe in trying to be really pragmatic, as so often when we feel low we let irrational emotions come in and dictate the situation. Keep a notebook or section on your phone where you can jot down your big and small wins. Documenting the times where you’re getting any kind of praise or feedback that makes you feel good about yourself is great to have on hand when you are feeling low or questioning your worth.

There’s no point sitting there second-guessing yourself after, say, not getting a job, and assuming that you’re just not good enough and it’s totally because of you. I’ve been on both sides of recruitment and you just never know, a whole host of reasons play into it from the company side of things. So to stop stewing on what you could’ve done wrong in the situation, it might be better to reach out to the interviewer for feedback that you can then use constructively.

How can what you teach about career confidence be applied outside of a work environment?

I think it’s so important that we do stuff outside of our careers that allows us that satisfaction and fulfilment, without having the same sense of being judged on it by others, or by ourselves. When you do things publically or professionally, you often find yourself comparing the quality of it, whether you’ve done a good enough job.

I just started, along with my friend, the Instagram account @hardtoforgetcollective, which isn’t about us making money or turning into rockstar influencers with it. It’s about building a sense of community with each other – sharing our funny Whatsapp messages or things we’ve talked about whilst drinking wine on Facetime – and bringing that to whoever might need it, too. Fun and enjoyment is totally at the core.

Passion projects are such a positive way to enjoy experiences and even build skills without feeling that pressure. Even if it’s not the main agenda, the by-products of our hobbies are often things that help through all aspects of life.

Finally, our classic GRL Talk question: what advice would you give your 16-year-old self?

Don’t let anyone pigeon-hole you. Actually, I think the reason I feel so confident in myself now is because I got to experience a lot because I tried loads of different things. I learned what I did like and what I didn’t. I learned what I’m good at, what I’m not good at.  Don’t let anybody strip you of that experience because you need to figure out what you stand for and you have to give everything a go to do that, it shouldn’t be dictated by anyone else. If you feel your potential being limited, I would try and change scenarios or environments, because it really can be damaging later on, and manifest as imposter syndrome.