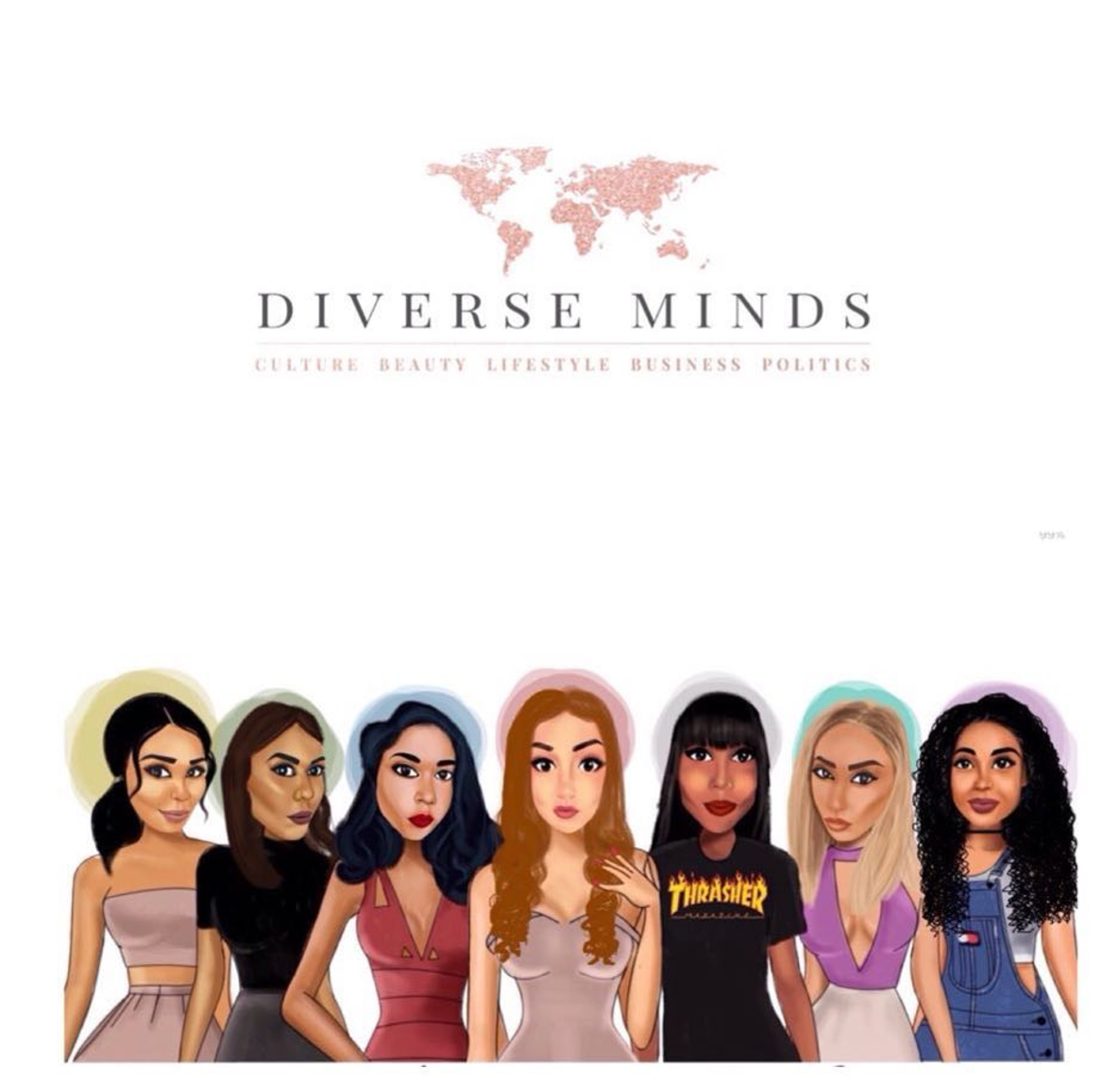 Diverseminds.net is a platform that embraces diversity, and female empowerment. Sounds up our street, right? After discovering the platform, and all its inspiring campaigns, myself and Shannon Leah Wall (owner of Diverseminds.net) sat down for a chinwag…

Tell our audience about Diverseminds and the aim of your platform?

Diverseminds.net is a relatively new platform with its main domain centring around female empowerment and diversity.  It’s multifaceted, so we do also blog about other topics including business, beauty, lifestyle, and culture. Myself, and five other friends have come together to create this platform, we are all from different cultures and hold similar views on the need for promoting diversity and empowerment.

Our aim is to embrace and empower incredible women that are following their dreams and deserve recognition. We also aim to confront current diversity issues which feed seclusion and division.

What was the inspiration behind creating Diverseminds?

My inspirations for starting diverse minds came from the political events of 2016. I woke up on the day of the Brexit election results and was surprised as how distraught I was over politics. It wasn’t just the results that had affected me, but the consequential the division that had been ignited in the U.K. Of course not everyone who voted out was racist and ignorant but, many were, and this was portrayed through various different media outlets. A division had been created in a place that I naively believed to be compassionate and accepting of so many different types of people. This division was a eye opener to me and many others that systematic racism and ignorance is a lot closer to home then previously thought.

And then of course came the Trump election… let’s not get me started on that.

Although these events have created segregation, tension, and division they have also exposed the need for ‘more’. More focus on battling systemic racism, more empowerment of women, more done to fight ignorance. So this is when the idea for diverse minds came along.

I, as a white women believe that if you’re white you are racist, even if you act in ways which make you believe you’re not, you are conditioned by the environment around you which embeds in us unconscious biases and privileges. This is why is it important to do something about it, the projects on diverseminds is to fight ignorance and prejudices not only of other races but religions and sexuality too.

What do you hope to achieve with this platform?

With this platform I hope to make other women feel that they can be whatever they want to be. I also hope to gain awareness on some of the current diversity issues.

The MuslimGirl Project is an incredible movement, why was this such an important project to create?

Muslims are being scrutinised against at the hand of what extremists have done. These extremists do not symbolise Muslims, they aren’t acting out as a Muslim. This is what people are failing to understand. This project is aiming to show people what being Muslim really means. The media has contributed to this islamophobia, it’s taken away the beauty of Islam and all the great things Islam stands for. Islam is such a beautiful religion. No one should ever have to be ashamed of something which is apart of their identity, something that gives them hope and inspires them to be better.

I’m really hoping this project helps make Muslims feel proud of their religion and shows others the beauty of Islam.

Given the current political climate, there’s a lot of Islamophobia ignorance and hatred flying around. Have Diverseminds been the victim of any online abuse, and if so what’s your advice on dealing with this?

Surprisingly we haven’t had that much online abuse, just one or two unwanted comments; if we did I don’t think I’d let it bother me. Even though my mum was a very feisty women, she always taught me to show compassion towards people who hold different opinions or lead a different life to me. Don’t get me wrong, it is very hard and I have been in a few explosive arguments on the topics of immigration and sexism, but I’ve seen that there’s actually no point in getting worked up. People come from different backgrounds and have different stories to me, some aren’t lucky enough to come from a place like London where you’re exposed to such brilliant multiculturism, and FOOD! So many different types of FOOOD!

Some people are just angry and full of hate because of their own lives, they want to hurt others, fuel a hateful society and blame others for their misfortunes.

Others are so conditioned by the environment around them that they cannot open their minds to others, which is such a shame.

If you are being exposed to abuse and feel it shaping your aura then try to think of that person running around naked screaming nonsense and everyone throwing things at them laughing, it actually works, your whole perception of them changes and you won’t feel anymore anger but instead pity.

Never let them disrupt your aura and change how you perceive the world.

Creating a space for diverse voices is something we’re both very passionate about, what specific arenas are you trying to create more diversity in?

All areas, our future projects will be focusing on diversity issues in many different areas such as fashion, tec, and business.

Tell us a little bit about your past projects, like #InterracialCouples and #Womenkillingit.

#WomenKillingIt consists of interviews from women killing it in different industries from art to business. We find fearless women following their dreams. In this project they tell us their stories, what inspires them, and gives other girls in their industry tips. They also talk about their culture and what they love about it. #WomenKillingIt is all about empowering women and giving other women role models to inspire them.

Our next project will look at the lack of diversity in the tec industry so stay tuned!

Okay, time for the question we ask everyone on GRL TALK. What would you go back and tell your 16 year-old self?

Hhhmmm interesting question, I would tell myself

2. I’d definitely tell myself to follow what I enjoy and have a passion for and not follow societal rules and restrictions. I was always into creative areas like fashion, media and art as these are what I done at GCSE’s and loved as I was growing up . However, I was constantly bombarded with comments saying these areas “aren’t stable” “aren’t proper careers” which now I’ve learnt is ridiculous. It’s all about how much you are willing to put in to your future and if you love what you’re doing, trust me you’ll go a lot further. Do what YOU want, just make sure you know for sure you are willing to put your all in it.