In this edition of our GRL Talk series, we chatted to freelance writer and campaigner Gina Martin. If you need a little bit of backstory, Gina’s been campaigning to make upskirting a a sexual offence after two men took upskirt pictures of her at a festival. Gina’s hashtag on twitter, #stopskirtingtheissue, has gained a lot of traction and her campaign garnered widespread support, making the news several times. We settled in for a chat with this fabulously passionate lady. 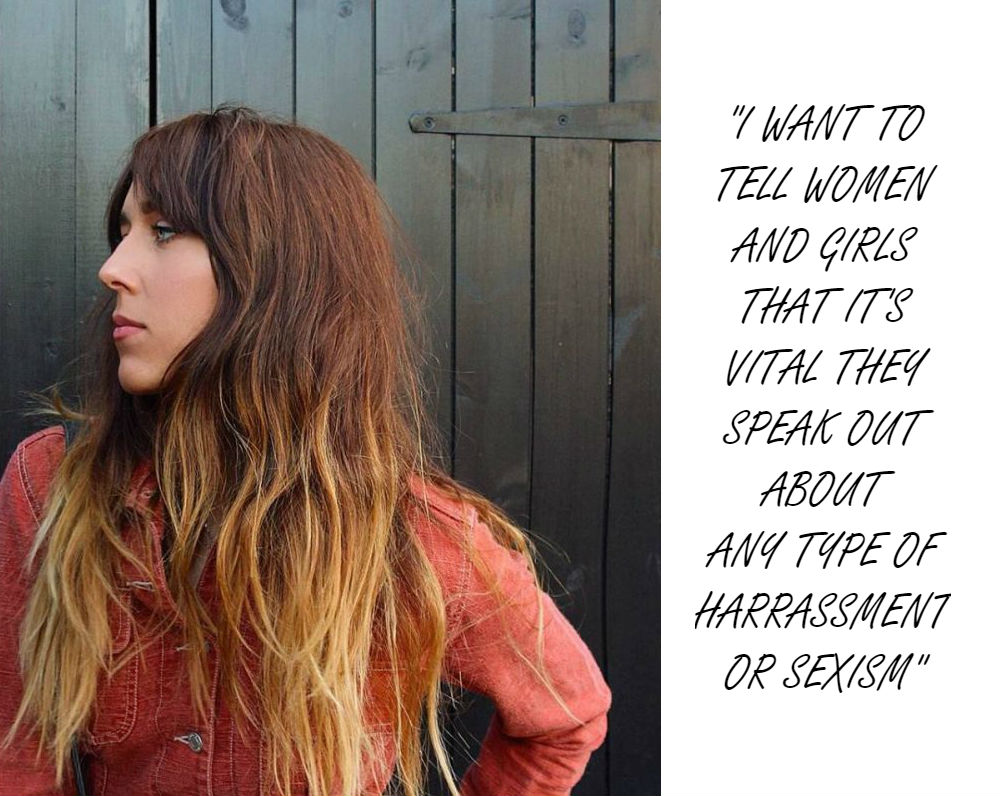 Hi Gina. As women, we often prepare for harassment and think we have an idea how we’ll react if it happens to us. Could you talk us through the emotions felt in that moment when you recognised yourself in the picture on the phone?

When i’d handed the man, phone, photo   and myself over to police, and they told me that there wasn’t much they could do I felt embarrassed. I sort of felt ashamed – as if i’d caused an issue I shouldn’t have. The narrative is that harassment is an ‘inconvenience’ and a public nuisance, but harassment should never be normalised in that way. It’s a crime with a victim.

After you initially spoke to the police at the festival, do you feel like your case was taken as seriously as it should have been? What could have been done differently?

I honestly don’t pin the blame on the police that dealt with me. They were kind and considerate but I genuinely believe that they knew the law didn’t support them, and that there wasn’t an easy way to prosecute this, so they did all they could think to do which was delete the evidence (the picture he took). I do believe they could have communicated better and told me my options more clearly. They didn’t make my options clear.

You’re campaigning to make upskirting a sexual offence – could you update us on how the process has been and what’s been going so far?

It’s been going really well. I am represented by global law firm Gibson Dunn and Crutcher and my campaign partner is brilliant lawyer Ryan Whelan. We have support from England’s top academics, lawyers, MPs from across the main political parties, the police high-commission and the major of London. Every single person i’ve come into contact with on this campaign has supported amending the law. No right-thinking person would oppose this.

What do you think should be the consequence for those who violate others in this way?

I believe the anyone proved to be doing this should be on the sex offenders register.

You’ve gained a lot of support from the campaign on social and from the media. Were you surprised by that?

I wasn’t. But the reason I wasn’t was because the reaction was the exact reaction I had when I found out that Upskirting isnt a sexual offence in the UK and Wales. I was shocked and angry. Everyone being shocked by this too wasn’t a surprise, but it was exactly what I needed to push this campaign further.

In the interview you gave on Good Morning Britain, some infuriating comments were made by a former police officer suggesting that little should be done about upskirting as police officers were already busy dealing with issues such as terrorism. What do you think about the kind of comparison culture we as women encounter when speaking up about sexual assault and harassment? ‘Well at least X didn’t happen, it could’ve been much worse.’ etc.

The police officer in question was incredibly supportive of my campaign off camera. So there’s that. Her comments on camera are exactly why sexual harassment happens so often. When someone breaks their leg and is recovering in hospital we don’t say ‘well, at least you didn’t break both legs’, to insinuate that only ‘serious’ assaults or situations are important is completely bullshit. Her comments were victim blaming and close-minded.

In a post-Weinstein era, with campaigns like #metoo as well as #stopskirtingtheissue, do you think this tidal wave of honesty from women will make more men sit up and listen to the issues of women?

I really do. I have had more conversations about sexual assault/every day sexism with men in the last month than i’ve ever had, and the men around me have been more interested and concerned about what women have to deal with than ever. It’s on their radar now, whereas before, because they don’t deal with it every day like we do, maybe it wasn’t.

Do you have any advice for women wanting to start a conversation about sexual harassment or upskirting with the men in their life?

I think the most powerful way is to start with your own experience. Make your boyfriend/friend/father aware of the harassment you receive daily and go from there. That way they can see first-hand what a huge problem it is and how systemic it is. It’s hard for men who don’t experience this to understand that sexism isn’t just rape, but that it’s a cultural, systemic problem for all women, so, starting with specific incidents helps to illustrate that.

What does a typical day look like for you now? How has it changed since you started the campaign?

I work full time and I’m a freelancer so I’m a lot busier now! A typical day is usually waking up early and replying to emails on the way to work (like this one!), or heading to a studio to do a radio or TV interview. Followed by work at 9am, during my lunch break i’ll work on the campaign whether its putting women’s stories together, planning media with my lawyer or writing freelance pieces on the campaign, then after work i’ll be drinking a glass of wine with my boyfriend and our tortoises working out what the hell comes next for the campaign!

A classic FGRLS chat question we ask is: what advice would you give to your sixteen year old self?

This is a brilliant question. I’d say ‘Try and turn negativity into a positive wherever you can. Never fit in. The moment you fit in, you disappear, and if you disappear you can’t help make the world a better place.’

I want to tell women and girls that it’s vital they speak out against any type of harassment or sexism. Even if it’s a throw away comment someone makes – it’s the only way we can end sexism. Equally though, remember that many of the men in your life may not realise how socialised they have been and how much they benefit from the oppression of women, so be kind and calm. Teach, don’t punish.

Huge thank you to Gina for chatting to us.

You can sign the Care2 petition calling for upskirt photos to be made illegal under the Sexual Offences Act of 2003 here.