For this edition of GRL Talk, we picked the brains of poet extraordinaire and producer, Charly Cox. Her social bios may read “You’re probably only here because you fancied one of my ex-bosses”, but don’t be fooled by this modesty – she’s as talented as they get. And we’re definitely only here for Charly. 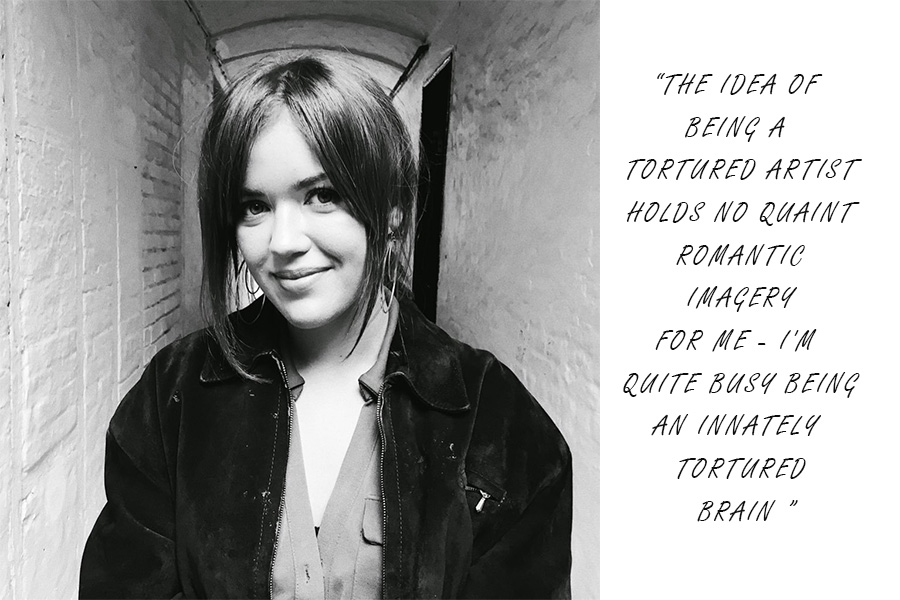 Hi Charly, for those who don’t follow your work can you give a little synopsis of what you’re about?

Oh heeeey! In a tiny digestible nugget – I’m a 22-year-old pro freelancer (I used to produce and give digital consultancy to YouTube channels such as JacksGap, Caspar Lee, Russell Brand and most recently the Global Goals), poet and mental health activist. I am on a desperate quest to destigmatize mental health and the banalities of growing up as a young woman in the twenty-first century, through performing and sharing poetry. Quite niche, isn’t it?

I saw you perform at Oasis Fashion the other night, and was blown away! ‘Just Stuck’ really resonated with me, do you have a favourite poem? Or would that be like making you pick between children?

Ah, thank you so much! That’s awfully kind. Just Stuck is also a personal favourite, I feel my most Taylor Swift when I read it. ‘Funny’ is another one – I wrote it on my iPhone at 3AM a year or so ago.

It’s still the most accurate way I’ve ever been able to describe that gross, all-encompassing feeling of anxiety and depression. Being too afraid or embarrassed to admit it to whoever is sat enduring your meek company. Performing ‘Funny’ feels like a great reclamation of power and self.

What’s one piece of advice you’d give aspiring poets about getting over the fear of putting work out there in public?

It is, admittedly, very difficult. You will face moments of self-doubt, fear and perhaps even impostor syndrome. I STILL feel weird about being branded as a ‘poet’. For some reason it sounds so Dickensian and accomplished, that I could never reach it, even though by writing poetry…you are… get ready for it…a poet. But the reward is much greater than all those feelings combined.

If it’s something that you enjoy doing and feel compelled to share – just DO IT. Being candid about your feelings and honest about your struggles or even elated about loves – is something that someone else will also relate to. Even if one person enjoys it, that’s one person more than you in your bedroom and an audience capable of giving you the praise you deserve!

Being a writer, it’s often a tricky balance of trying to work through mental health issues by writing, versus not romanticising issues or willing sadness to get inspired. How do you keep on the ‘healthy’ side of this line?

I try and start the sentiment of a poem when I’m in the midst of the feeling; that way I know it’ll be as true to the cause as possible. You never feel romantic and cute when you’ve got mascara confusing itself for snot, half way down your face, when you’re having a panic attack on a train platform. So, I empty my brain out as soon as I can once it’s hit and then finesse it once I’ve had a glass of wine and a reassuring chat with a friend.

The idea of being a tortured artist holds no quaint romantic imagery for me – I’m quite busy being an innately tortured brain that wants to be freed to have mental space to wrap myself up and enjoy whatever aesthetic it’s supposed to hold!

You’ve just announced your first book! Congrats. Can you tell us about ‘She Must Be Mad’?

Yay! It feels so good to finally be able to tell people without forcing them to air sign a Non-Disclosure Agreement. It’s a collection of poetry and prose detailing a coming of age. All the heartbreaks, the confusion, the mental fog and the struggle. There are some light-hearted bits in there too.

It’s much more autobiographical than I ever thought I’d put out. It’s very honest. I hope for those who read it, it’ll be a call for communion. That we’re all in this together, going through the same nonsense; and once we realise that we have the power to support each other and the platforms to be honest about it, through it we can collectively share the weight of it all.

What’s the writing process been like? As hard as you’d imagine?

I imagined myself to be holed up in a fairy-lit cafe with never-ending glasses of wine and coffee and chips, but the reality is much different. I sit most days in the same corner of my mum’s sofa in my pyjamas, with daytime tv blaring in the background, willing it all out. It’s a new sort of challenge. But one that’s made ever so slightly easier by the fact I’m revisiting a lot of old diaries and snippets, that I wrote when I was 15/16, to rework and play with. It’s both emotional turmoil and therapy combined.

Who are the women who most inspire you, and why?

Alaa Murabit is the most astounding woman I’ve ever had the pleasure of meeting and am now able to call a friend. She makes me proud to be a woman with a voice and an opinion. Whenever I watch her talks online, I feel like the most powerful woman in the world. She is it.

My friend Beth for her funniness, whenever I write anything I think ‘would Beth laugh?’ and if it’s a no I scrap it. She makes me strive to be smarter – you really can’t be funny unless you’re smart.

And my Mum and my grandmother, they’ve got an insane work ethic and have never let anything defeat them. They’re fearless and driven and resourceful, if I turn out to be anything like them I’ll be very happy (…and also working until I’m 105).

Your open letter to Trump hits the nail on the head, how do you include current affairs/politics/feminism into your work whilst keeping it poetic?

Thank you! Political angst and frustration at the current climate is a feeling and an emotion as much as any other I’d have towards my personal life – it’s been about encapsulating how it makes me feel and tying it into a cause. Sadly, I’ve spent more nights awake with heartbreak over the state of the world than I have done over any relationship or romance, it’s not been difficult to write about that.

Now, for the question we always ask during GRL Talk – what would you go back and tell your 16-year-old-self?

It’ll be over soon. You’ll be 17 before you know it and 20 much quicker than you could ever imagine. Stop feeling as though all your success must come now and that you’ll only be worthy or interesting if you crack it all as a kid. You’re not supposed to. You’re stronger than you know and smarter than you think – all the things you wished for will happen because you’re gonna work your butt off. You’ve been through a lot more than you care to let yourself realise. Those moments when you want to keep asking ‘WHY IS IT ALWAYS ME?’ replace it with the knowledge that it’s always you because it was built to make you resilient and compassionate. You’re going to surprise yourself, you’re going to be great.