Chatting with Laura Jane Williams is everything you’d want from interviewing an author – she’s gregarious, eloquent, emotive and endlessly quotable. If you haven’t come across Laura before, then this GRL Talk segment will have you following her every online-move. She’s a published author (of two brilliant books), an ex-Grazia dating columnist, runs her own writing workshops and is behind the popular blog SuperlativelyRude. I’m out of breath just writing that. Even Laura’s Instagram could count as an artform in its own right; the captions act as magical nuggets of advice, musing and more. 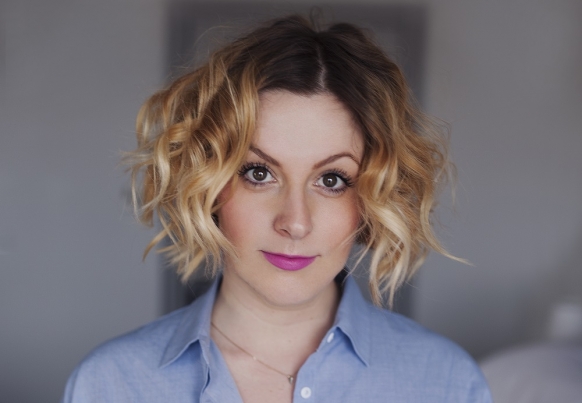 You’ve had quite the year! From releasing Ice Cream for Breakfast, to going viral for wiping out!

(Laughs) Please do link to that, some of my best work.

i can't stop watching this pic.twitter.com/eQq4q29FAS

My highlight was actually more of a personal one, in that for the last ten years I’ve done ‘monthly reflections’ and each one called for “more white space”. I knew I was working too hard, but I didn’t know how to stop it because everything felt so necessary.

In 2017 I got into my first serious relationship after about a decade, and I couldn’t do it all. You can’t work weekends and have quality time with the person that you love. So, I really had to take a step back to pick which was most important and what I could leave. It’s finally opened up white space to me. I really feel like I’ve got more of a handle on what it is to be a successful human, not just a successful career woman.

What advice would you give aspiring writers, and what did your path to becoming a published author look like?

My advice would boil down to write things and show people; you’re not going to write the best thing right away but keep writing, because you’re not your art. Write something, get feedback, and use it to get better at your next thing.

When you’re ready it’s about pitching. Grazia approached me after seeing an eloquent twitter rant I’d done and asked me to write a proper pitch, as they thought there was a feature in it. I had to google “how to write an article pitch for features”. That’s exactly how I got an agent for my book; I tweeted about needing an agent and having half a manuscript and asked people to share it!

Is there a third book in the works, or are you taking a well-earned break?

Yes, there’s a third, a fourth, a fifth and a sixth! I’m very honoured to be featured in Stylist’s ‘Life Lessons from Remarkable Women’, it comes out on International Women’s Day this year. So that’s beautiful! And Ice Cream for Breakfast is being published in several countries this year.

So yes, I am working on a third project and I’m also working on some TV stuff.

Going back to that lesson on white space, now I get to enjoy what I’ve done for a minute. I feel like I’ve stepped off the hamster wheel – so whatever comes next will come from this place of an authentic need to create something, rather than to keep the wheel spinning. I’m not interested in keeping the wheel spinning.

You’re one of my favourite people on Instagram (especially stories). Have you always been so honest or has that come with self-discovery? And do you think there’s ever such a thing as over-sharing?

A lot of people ask me about honesty in my work, and I always find that slightly perplexing because I don’t know any other way to be. What comes off in my work is that I like myself, and that’s what people relate to. That’s why the small community I’ve got is such an engaged community – because you can trust someone who likes themselves! The snakes of the world are the insecure, needy, unhappy people who feel the need to scream over others. I’m honest about the work it takes to like myself.

You kind of touched on this, but your community feels more like a conversation.

Yes, and the fact that I don’t rely on social media for my income, like an influencer, means I end up doing my business of being human online. That conversation generates my ideas and helps me write. Instagram is my office kitchen – it’s where I go to chat in-between work, and then it makes my work better because I’ve gone and connected.

There’s a big conversation around sponsored content at the moment, and it’s something you could probably do quite easily, is that a conscious decision to steer clear of this?

I feel the area of sponsored content is finally maturing into itself now. I have a tweet doing quite well at the moment of Princess Charlotte looking like she’s a second away from going “insert #spon” here.

Princess Charlotte looks like she’s about to type on Insta, “If you’re anything like me, The January Blues are hitting peak right now. Can’t we be back on the sofa eating selection boxes? Lol. Anyway, I’m finding sunshine on my feet with these RED *insert brand here* sellsellsell pic.twitter.com/QWa4tugJ8u

We’re moving away from that now, and there’s an interesting collision happening. For me, there’s no difference in accepting a paycheck from an advertising agency to accepting one from Grazia for my dating column if what I’m doing is organic and there’s passion. It’s all sponsored content, the Handmaids tale, is still sponsored content – there’s still an agenda when the commissioners create that.

How did you find documenting your dating-life every week affected your quest for love?  Was it a positive influence?

I don’t regret doing it, but I’m not sure I’d do it again. It was really interesting as I got the gig, and the editor said it was the best pitch she’d ever read – I’d really fucking nailed it and I was so proud – but, as time went on, I think it affected me in ways that I could have never imagined.

So many people said “omg, dream job!”, because it looks like living that Sex in The City life, but to boil down an experience to 500 words weekly is tough. The quest for love is much more nuanced than that and perhaps there are other ways to tell that story than in a column. The team was so supportive, and my Editor Emily Maddick was an absolute dream. However, it’s not like writing a book where you have a really intense burst of writing, and then you leave it, it’s week-on-week revisiting your own story. It holds you accountable in a lot of ways, but part of you does become a little number.

Did you feel like you had to go on more dates, or change your social life, for the column?

No! The whole point of me pitching the column was that I really was dating like it was my job. So, I made it my job. I’m thankful for the column because I think it ending was me dating that way ending, which put me on the trajectory for a different kind of love.

You’ve spoken about loneliness recently, which is a word a lot of people are scared to use. Why do you think there’s such a stigma around this?

We think it’s contagious, and I think it’s the one thing we fear the most. So much boils down to loneliness – that’s what FOMO is. We all want to be part of something, which is utterly brilliant, but when we don’t feel part of something it eviscerates us. The ironic thing being, when I said on Instagram about having five breathes of loneliness on Sunday morning, so many people said it made them feel less alone. It’s the big last taboo in a lot of ways!

Becoming and Ice Cream for Breakfast are two bloody amazing books, but also very different in so many ways. How did the writing process differ for each of these?

Becoming is direct-memoir, in that my high-school sweetheart, boyfriend of almost a decade, and soulmate, left me to marry my best friend. It ruined me when I started to write it, but I knew it was inherent to my healing that I did – I just so happened to be able to monetise that, by making it good enough. Writing becoming was lonelier, but a lot more personal.

With Ice Cream for Breakfast, the publisher came to me and said, “I know you’ve taken a break from writing because you had burnout after the first book but are there any lessons that you’ve learned from taking that break?”. I became a children’s part-time nanny. The publisher asked if I’d like to talk about those lessons and that they had an idea – so Ice Cream for Breakfast was a lot more collaborative. I knew what their objective was, I was able to use my own experience to fit around that, and together we built something that’s totally different in tone, and yet I’m equally proud of both. Ice Cream was a massive accomplishment for me, and it also meant I got over the dreaded second book. I’m ready for the difficult third book now!

Our final, and a question we ask everyone on GRL Talk, if you could tell your 16-year-old-self anything, what would it be?

Stay up to date with her news, here.