We have seen the LGBTQ+ community discussed more regularly and pulled apart frequently, within pop culture and throughout mainstream media, during the past few years. Talks about gender fluidity and the rights of queer individuals have been plastered within newspapers, magazines and online articles. We’ve seen the fashion industry take a bigger interest in the LGBTQ+ community and freedom of expression through clothing, fashion campaigns and magazines. Fashion brands and publications have been scrutinised and questioned over  whether their concern for the LGBTQ+ community is legitimate, or if the likes of Vogue, Calvin Klein, H&M and many other brands/publications are just using the word ‘queer’ as a way to entice new customers; seeing it more as a trend than an actual way of life. We can celebrate with campaigns such as Laverne Cox on the cover of Time Magazine and the Tate Gallery holding a major exhibition exploring ‘queer art’, But I still question whether fashion photography is helpful to the LGBTQ+ community, or if it is, in fact, hindering it.

I wanted to create a project that showed respect to the LGBTQ+ community. Being a cis female, I wanted to show that there are ways to create meaningful and interesting work about different genders and sexualities, without using it as a trend.

Being a cis female, I wanted to show that there are ways to create meaningful and interesting work about different genders and sexualities, without using it as a trend. 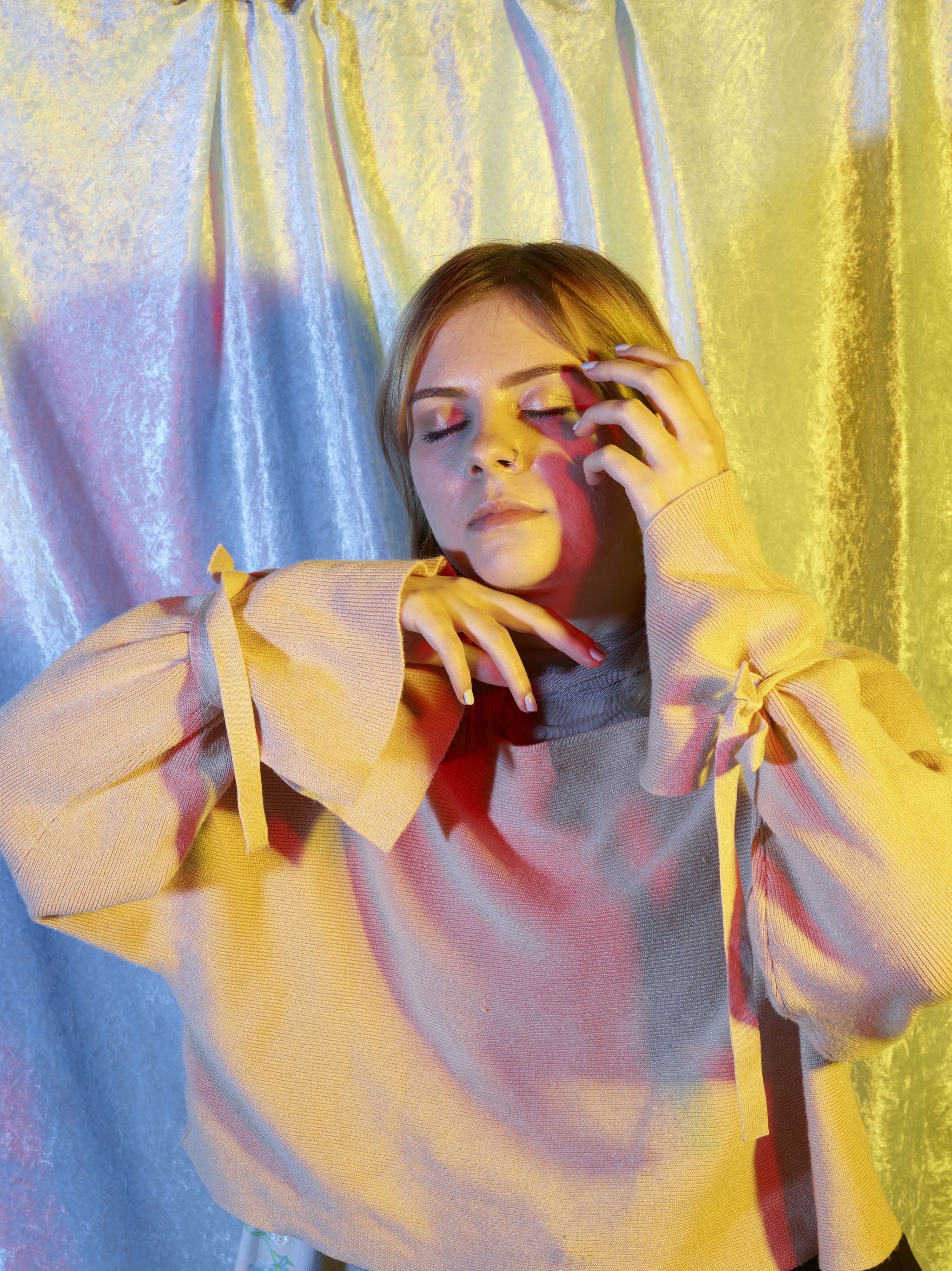 Katie, a bisexual, that I met at University. Her story is important, as a bisexual female, I feel that the idea of ‘swinging both ways’ has been very poorly represented in the media and is often misunderstood, not only by heterosexual people but often-homosexual people too.

“One of my favourite things to see is female celebrities being asked ignorantly about their sexuality, for example, whether they’re ‘bisexual or gay now’ because that they’re dating a woman, and the response just being ‘I don’t believe in labels’. It’s empowering to see them disregarding labels and seeing individuals for who they are. Hopefully, I’ll reach that place of comfort, I do it less and less, but I question and try to place my own sexuality on a scale and I should just realise by now it doesn’t need defining. I love seeing queer women in magazines/ fashion editorials wearing men’s clothes with short butch shaves or super short hair, such as Kristen Stewart, Cara Delevingne and Ruby Rose”.

Ruby and Hollie, both female drag queens, perform in an astonishing, beautiful and extremely entertaining way. With the recent backlash against RuPaul’s comment on female and transgender drag queens, I think it is safe to say that the majority of people are not on his side. However, they are both queer and have had hardships due to this and the fact they perform in drag. 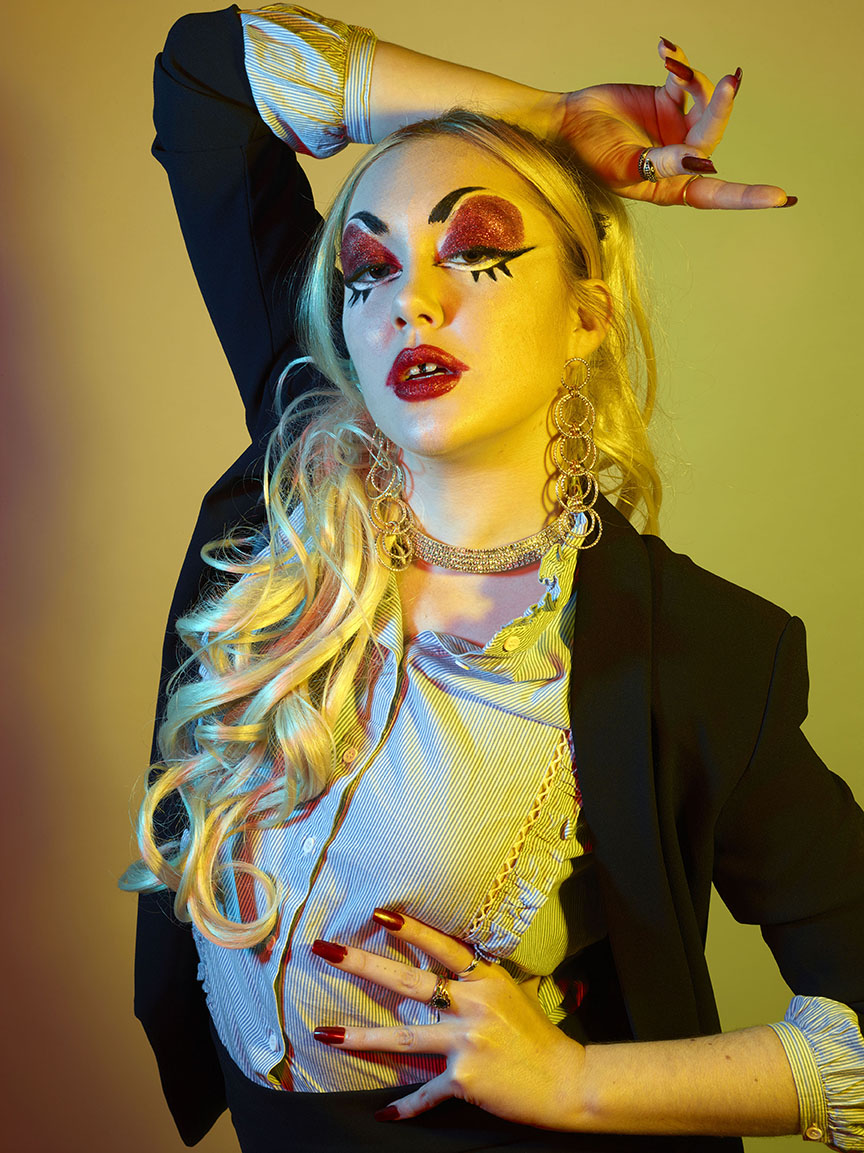 “For a long time, I would dress up in my room and just take selfies and dance around because I had a fear that I wasn’t “allowed” to do drag, as I wasn’t a gay man. I felt like that I was doing was wrong and childish. It wasn’t until my foundation year when I stumbled across a short documentary on Broadly that I realised I wasn’t the only woman in this position and that bio queens were as valid as traditional drag queens”. 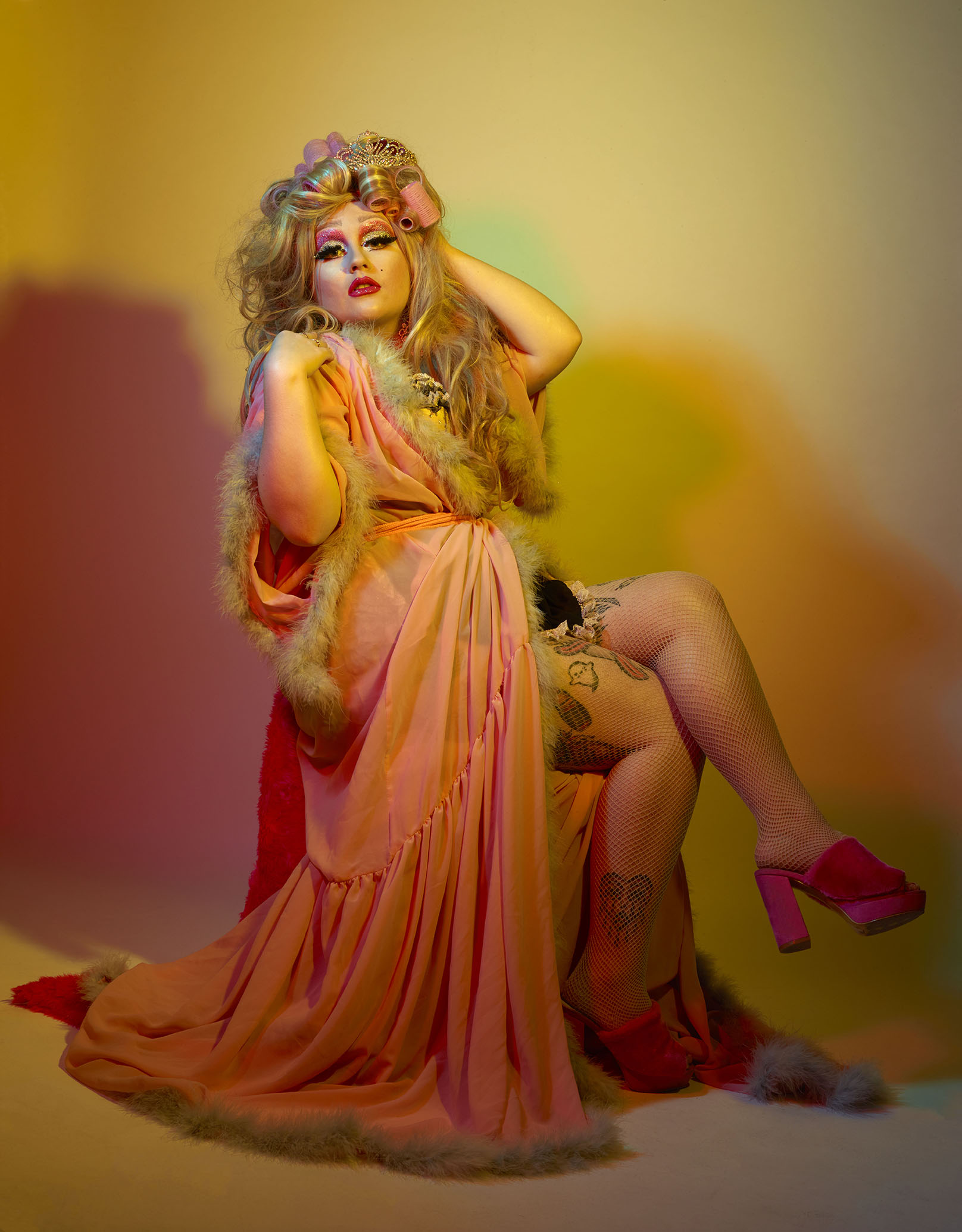 Hollie added “As a female, I do encounter negativity towards my style of drag due to my privilege as a woman. I understand my privilege but drag isn’t about being female or a woman, it’s about deconstructing the constructs of gender and playing around with it in a humorous way.  The negativity has occurred at commercial drag clubs in Leeds, while at my own events and also in conversation with people who don’t have a vast knowledge of queer theory or drag itself”.

They agree that drag queens being put into mainstream media through the likes of RuPaul’s Drag Race is a positive step, but also agree that it can be problematic that not all types of drag queens are represented in the show, with female drag queens unable to participate.

understand my privilege but drag isn’t about being female or a woman, it’s about deconstructing the constructs of gender and playing around with it in a humorous way. 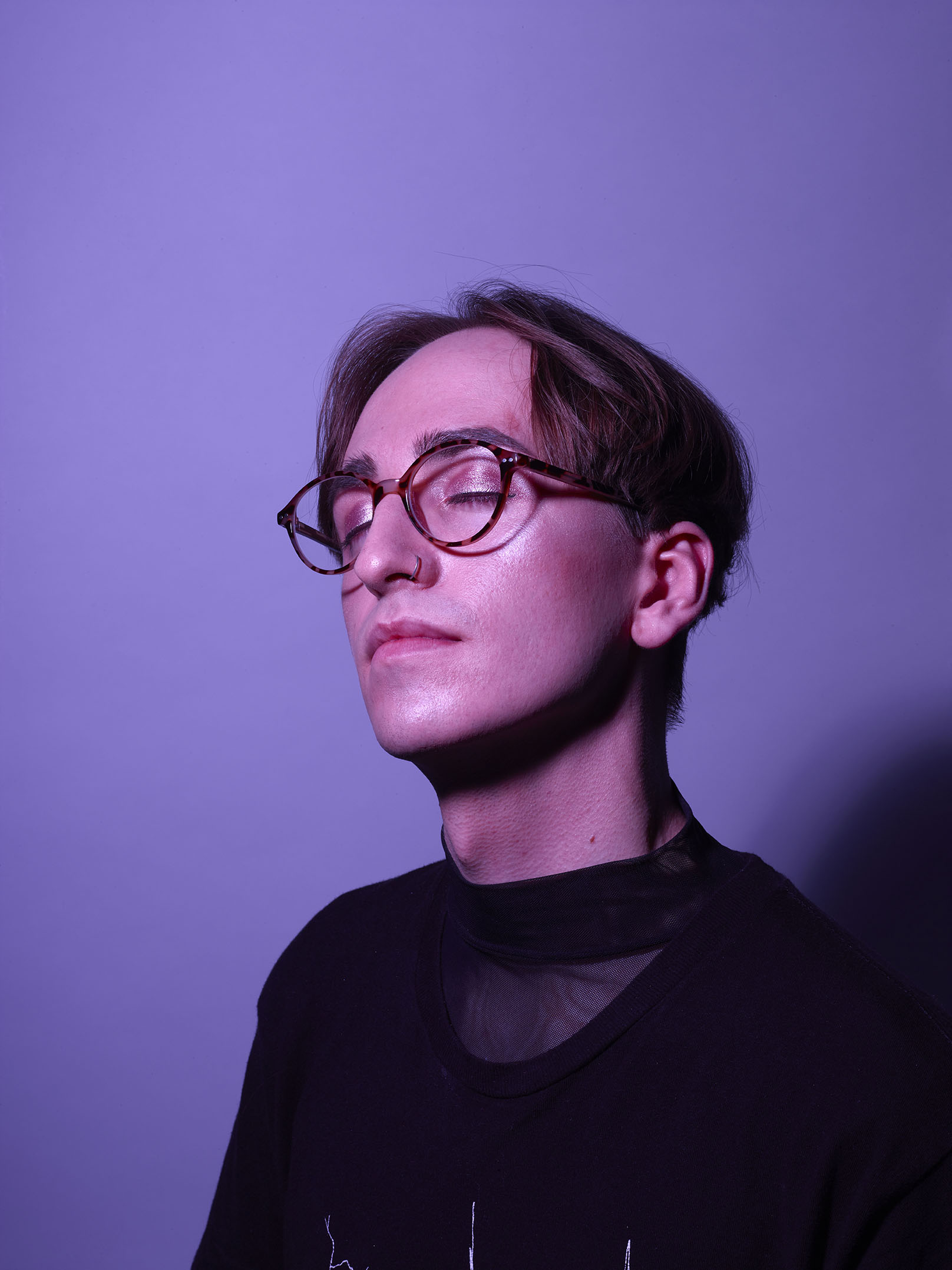 Adam is a pansexual/gender fluid individual who I have seen grow and become more comfortable with themselves throughout this time. This has not come easily, however.

Adam explained “When first expressing my gender and identity in new ways (e.g. wearing makeup and “women’s” clothing, shaving body hair), I found that people, usually heterosexual men, would avoid eye contact and conversation with me, even some I’d known for a while”.

“Though it’s widely seen as socially acceptable to be ‘gay’ in western culture, it is often only acceptable by heteronormative standards: gay men are assumed to be camp and feminine, lesbians are assumed to be butch, bisexual women are used as an object of sexual fantasy for heterosexual men and bisexual men are perceived as half-closeted gay men or non-existent, while transgender individuals are usually only shown if they can “pass” as their gender. Members of the LGBTQ+ community who do not meet these standards oft seem to be underrepresented, disregarded or mislabelled by the media”. 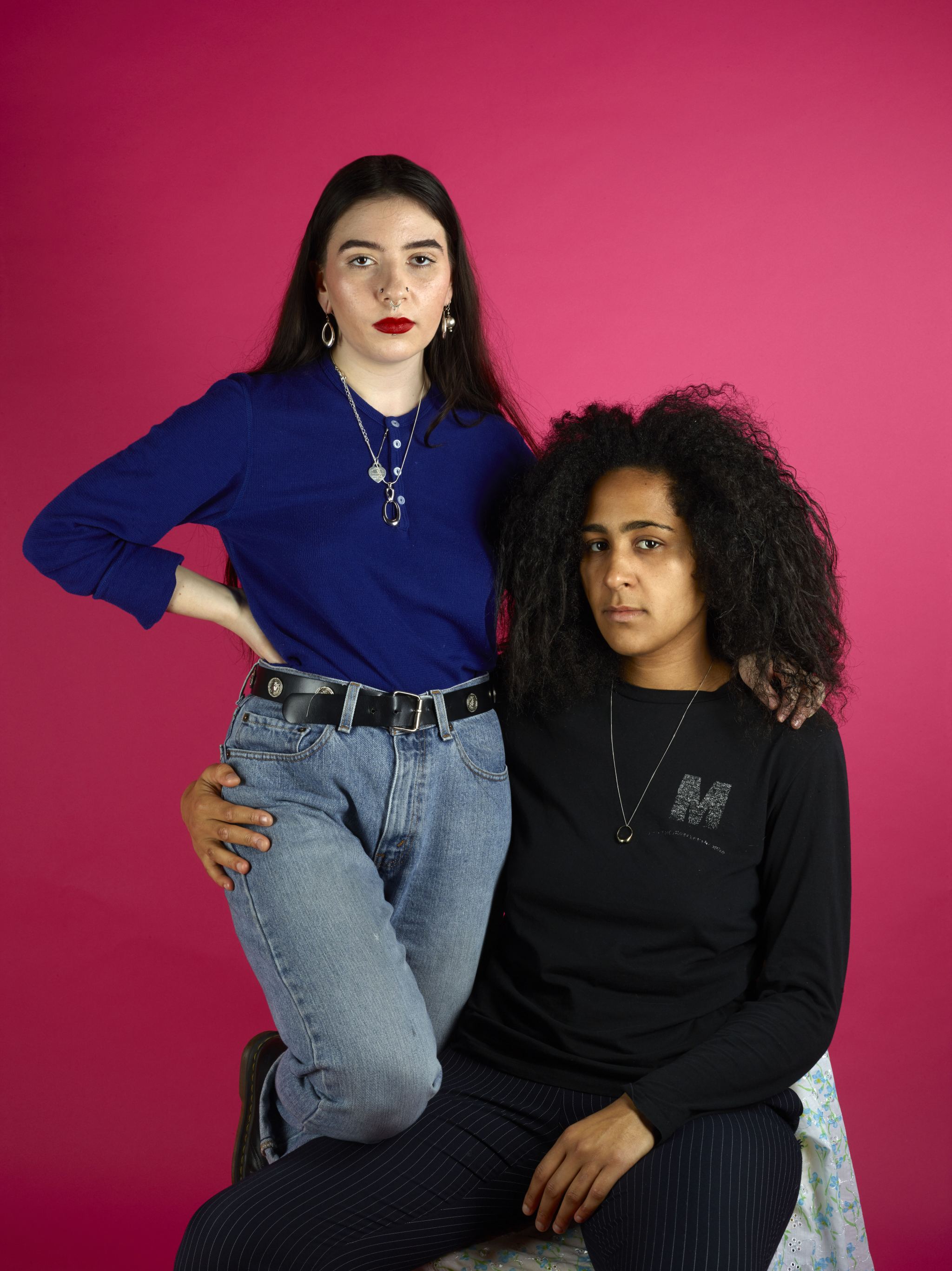 Sophie and Murphy are a lesbian couple living together in Leeds. When I asked Sophie about how her sexuality has affected her life, she referred to her physical appearance being more ‘masculine’ than Murphy, saying “I can’t walk down the street without somebody trying to figure out my gender. When I walk hand in hand with Murphy we are often stared at. Whether we are chastised by homophobic people, or over sexualised.”

They shared a story about a night in Leeds, which shows me how far we have to go before people of different sexualities and genders gain the same respect as heterosexual people. Murphy says: “One evening this summer we were on Call Lane and I was approached by two men, when one of them realised I was with Sophie he asked us to ‘prove’ we were lesbians by kissing. When we refused they started shouting homophobic abuse at us. We asked a nearby police officer to intervene and they told us to “calm down” and then walked away. The same week, Leeds police cars had ‘support against hate crimes’ written on them”. When talking about how lesbians are treated in the media and in real life, it seems to be a running theme that lesbians are overly sexualised. “Gay women are always over-sexualised. Unless they’re on Ellen, women involved in fashion who have anything to do with the LGBTQ+ community are sexualised. Kristen Stewart was denied her sexuality in the media for months, deliberately referring to an obvious gay relationship as a friendship”.

Gay women are always over-sexualised. Unless they’re on Ellen, women involved in fashion who have anything to do with the LGBTQ+ community are sexualised.

To me, it feels that the exposure has its pros and its cons. It is extremely important that the LGBTQ+ community gets more exposure and people begin to understand and respect them as individuals. I feel as though people struggling with their sexuality or gender identity could really benefit from having LGBTQ+ celebrities and campaigns showing their support. However, if companies are only using people of the LGBTQ+ community to sell products then that isn’t the kind of exposure that the community should have or what it deserves. Everyone is beautiful and different in their own way.

You can find more photos and the full interview in my Zine titled ‘Absurd’. All the money I’ve made through selling it will go to an LGBTQIA charity (The Albert Kennedy Trust). This project led me to more than just creating another photo series, it really made me feel in touch with the community and their struggles.