“Cool girl, men always use that, don’t they? As their defining compliment.” Amy Dunne, the wicked-smart, collected character of Gone Girl coos over a montage of her transforming her image from the aforementioned, highly desired Cool Girl to a Basic Becky. Ok, so she’s doing it to frame her husband for her murder, but it doesn’t mean that she’s not right?! The tone of her tired voice strikes a nerve in every self-defining womxn, it speaks of the prices we pay to be pretty, to be considered smart or worthy and it hits close to home. These prices we pay seem to get us nowhere, they don’t deliver on the promises they make. 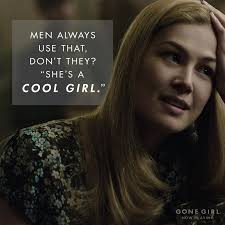 This got me thinking, what is a Cool Girl? I couldn’t quite define her. Every person I asked loosely defined her along the lines of “hipster”, “smart” and obviously “attractive”, it was imperative that she be hot. Each article I scoured, from The Guardian to Jezebel, noted that her point of gravitas was her sex appeal while her orbiting attributes were being elusive, easy-going, hedonistic fun-loving gal allergic to feelings.

Cool Girl wavered along subjectivity and desire; there was no static definition for her. However, I found that the one constant attribute was the word: chill. Okay, so Cool Girl is chill. Rather, Cool Girl is not affected by your shitty behaviour, she doesn’t rise to it or it simply doesn’t bother her – even if it should. “Go ahead, shit on me, I’m the Cool Girl.”

All I got from this is Cool Girl is passive. She cares about being liked. Cool Girl swims on the currents of passativity and likability, keeping internalised misogyny tucked neatly under her arm to stay afloat. This made me realise, that in this particular instance the concept of the Cool Girl is reliant on heteronormativity; it only works within heterosexual contexts, as the desire she creates in remaining passive is meant to cater to that of the patriarchal gaze. This is because, quite simply, the trope has been created to cater to serve that gaze alone.

So, Cool Girl wants to be to be likeable in all spheres, she wants to be pretty, feminine, approachable. The maintenance of her femininity is not only in her physical appearance but the body language she exhibits. It is welcoming and warm. In the wake of insidious socialisation, Cool Girl has become responsive and reflexive to societal rules. As Anne Helen Petersen wrote in Jennifer Lawrence and The History of Cool Girls she adapts quickly to the favourable traits at a given time in society. She wants to make sure she’s likeable so she remains passive. She rarely challenges you, or gets mad – she’s not necessarily submissive but she’s certainly not going to kick up a fuss. Remaining likeable is to maintain an image of femininity, and femininity (from the patriarchal gaze) is passive, it’s welcoming, compliant, and sensitive. This trope is the opposing image of masculinity. That means Cool Girl rarely disagrees with anything other than a mild irritation, she simply“presents her mouth for fucking”.

Likability is something that has continued to plague self-defining womxn and politics for a while; particularly when in the context of self-defining womxn. It is the notion that these women should in all contexts stay calm and respectful, even when they’re being actively disrespected.

One thing inherently wrong with this concept, aside from the obvious, is that it’s not necessarily based on human interaction. Elements of systematic oppression are ignored, elements that would rightly make the oppressed feel…well oppressed, dehumanised. That passivity, that likability, is central to an efficient performance of femininity. And this performance will grant you one of two things, and if you’re lucky maybe more: one, a mate, a husband, a man who sees you for who you really are, a Cool Girl! Liberated, educated and so chill, so understanding. Or two, it grants you space into a typically male-dominated sphere – usually at the expense of other womxn.

I consider myself lucky, I learnt rather quickly that the behaviours I would be crucified for, men would be sainted for. Stuck in an eternal virgin/whore dichotomy in the inexhaustible realm of patriarchal commentaries surrounding women, I figured out pretty soon that I would be judged no matter what I did. Sadly, this did not leave me immune to wanting to be the Cool Girl – even feminists aren’t immune to the powers of fuqbois.

But Cool Girl doesn’t let these oppressive forces bother her, she is under the impression that if you internalise misogyny you are separated from the herd of angry, non-performing womxn.  More aptly, as Julie DiCaro wrote in The Dangers of the Cool Girl idea, by internalising misogyny the hope is that you are taken under the wing of males and treated with the same respect as their male peers. Misogyny holds the false promise of protection to those who internalise it. Cool Girl’s internalised misogyny ranges from the dislike and distrust of other womxn, to the disingenuous adaptation of ‘male’ behaviours. She drinks beer, yet remains a ‘healthy’ size, eats pizza and can party as hard as the rest of them all while maintaining that other girls are “so much drama”, plot twist, Cool Girl is actually one of the guys. Cool Girl maintains the standard of femininity whilst adopting favourable traits that allow her to be defined as “chill”. Like Peterson says, it is situated in a position where they reap the benefits of being a womxn and a man.

The obvious issue with this is that misogyny will not save you; regardless of your choice the patriarchy is designed to uphold lives of white, cisgendered, able-bodied men. By default, the majority of people fall outside of that and fall victim to its exclusionary and dehumanising practices. Even if the trope you exhibit is a patriarchal construct, it isn’t designed to save you, it’s designed to please others.

But even then, even as Cool Girl drinks down femininity in gulps, doesn’t allow herself to be irritated by the likes of men and adopts laddish behaviours, is to deny Cool Girl any other motivation to deny her agency? Maybe Cool Girl knows exactly what she’s doing. Is Cool Girl really the embodiment of internalised misogyny or is she simply bargaining with patriarchy? Making her way through a patriarchal wasteland of tiresome sexism and misogyny with a smile on her face that makes it that little bit easier to survive? Utilising the things men value to most in order to gain what they can in their given situation, much like our beloved, villainous anti-heroine Amy Dunne? A certain “performance art femininity” (coined by Tracy Moore in Jezebel) has certainly gotten me places in the past few years, while it hasn’t ever given me a strong foothold in any career, it’s given me things I wanted, namely free food and entry into exclusive venues.

But when I was under the wild guise of the Cool Girl, I found it to be emotionally exhausting. I was constantly underselling my self-worth for some sub-par white boy and in the end, it nearly broke me. I found myself clambering under this identity that I thought was so strong yet flexible; I thought it would be easy to sweep off but it crushed my sense of self because I’d never wanted to behave like anyone else up until this point. “For him, I’ll admit, I was willing to try.” And although I didn’t wax strip my pussy sore, I “blew him, semi-regularly” and remained a sexualised akin to the Manic Pixie Dream Girl in my portrayal of debauchery and bouncy casual misogyny. Perhaps, as Moore says, it is a rite of passage, a passing phase in our life, a “fuck you” to who we think we are.

I wonder if Cool Girl can still exist in such a political climate, I wonder if silence is still an option, if passivity and bargaining with patriarchy, re-adopting the femme is plausible. Something that DiCaro pointed out is the idea of “multiple feminisms” where supporting someone’s shitty, sexists attitude just because somehow feminism means supporting women no matter what. That in doing so, we ignore the larger, institutionalised structures at hand and fail to take accountability for our problematic behaviours. I wonder if I know Cool Girl, I wonder what she’d say, or if she’d simply smile in and tell me to “chill out.”