We’ve all got excited by a v witty, gif heavy opening convo on Bumble. Wedding bells chime in the back of our heads, and we find ourselves daydreaming about a life shared with this perfect stranger. And then BAM, mid Queer Eye gif exchange, the flirty banter ends, and the replies stop. Chloe Laws and Kate Sharp, FGRLS CLUB team members, list all the obvious reasons why this happens. 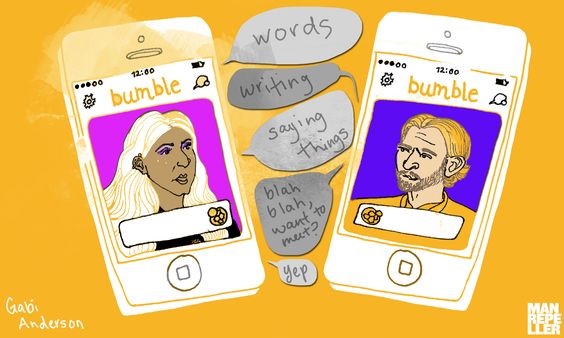 No, stop right there, it’s nothing to do with the fact that they’re not that interested or have found a relationship elsewhere. It’s 100% any one of these very very likely scenarios below:

2. Their cat got a very rare zombie disease, and then scratched them, and now they are eating people’s brains for shits and giggles. Zombie’s fingers notoriously decay, hence the lack of Bumble messaging going on.

3. They are part of MI6 and risked it all to match with you on Bumble, and now they’re being hunted by secret agents for breaking the rules.

4. The entirety of Clapham, where they reside (it’s always fucking Clapham), have lost phone signal. They will send a message by carrier pigeon shortly, hang on in there.

5. They are partaking in a digital detox, somewhere in Nebraska. They begged the Yogi guru to let them send you one.more.gif but they wouldn’t play ball.

6. They went swimming in the Thames fully clothed, their phone is currently residing in a bowl of rice and will take 2-3 weeks of drying out.

7. Their younger nephew grabbed the phone and it dropped, breaking their keypad. Now the letter that your name starts and ends with doesn’t work. So, it’s impossible to type your name on their phone.

8. They went to go get a manicure and accidentally got given overly large nails. They can’t type and or put their own shirt on. They need to wait for the next available appointment which is in 2- 4 months.

9. They are currently taking part in a political protest sit in. They have no access to their phone. They attempted to send a smoke signal, but the group only had one flare and they voted against using it for contacting you.

10. They went a got an awful haircut, they cannot contact anyone until their bangs have grown out. It takes time dammit.

But honestly babes, it is fine. There is totally a reason that she/him/they have not contacted you. Life gets in the way, THEY WILL/MAYBE/HOPEFULLY contact you before the year is out. Or you could just be totally dramatic and unblock them whilst keeping one eye on their social media in a completely healthy productive manner. Your call.