Donald Trump arrives in the UK today, for the first time since he became President of the US, to meet with the Queen and Theresa May.  There are rumours that he might also meet with his English-evil-twin Boris Johnson, the ex-foreign secretary.

Donald, if you already think the UK is “in turmoil”, honey, you ain’t seen nothing yet. Below is the low-down on how to protest Trump’s visit and generally tell him to fuck off. 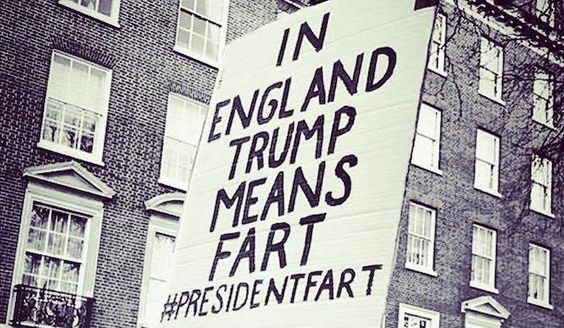 Join Together Against Trump tonight (Thursday 12th) at 5.30pm at Hanover Gate, where the protestors will create a wall of sound to give him the (un)welcome he deserves. Bring your megaphones, whistles, pots and pans and anything else you can make noise with!

This protest is backed by groups like Women for Refugee Women, the End Violence Against Women Coalition, Hope Not Hate, Stonewall, and more.  Taking place outside Parliament Square from 2-4pm, protestors are urged to wear rainbow colours and make noise to send a message of solidarity.

This march will start outside the Scottish Parliament, on July 14th between 12-4pm. The official Facebook page states “Join us in saying DUMP TRUMP! We shall overcomb!” – here, here!

Tremendous chance for First Minister @NicolaSturgeon to show great courage and let #TrumpBaby fly over my incredible golf hideout! Nicola is a very Special Lady, she can show my many friends in Scotland they have elected someone they can be very proud of! https://t.co/Al1cOWDVpU

A giant “Trump Baby” is and will be flying around the country during the visit.  Sadiq Khan, the Mayor of London, authorised the balloon, telling Good Morning Britain that “If it’s peaceful and if it’s safe. Look, I can’t be the censor. It’s not for me to decide what’s in good taste or bad taste”. If you see the baby, please share it on social media and tag the president.

“American Idiot” For No.1

The countdown is on to make this happen, and it’s not looking very likely, but nonetheless a valiant effort from the group trying to get Green Day’s American Idiot to number 1.

We’ll see you out there on the streets, figuratively and literally giving Trump the middle finger.