Poppy Stewart is the powerhouse manager behind Kentish Town’s feminist and LGBTQ+ inclusive waterhole hole and arts/music venue, The Lady Hamilton. Poppy’s vision is to have an ‘everything and everyone’ pub, putting the public house back in the centre of her local community. We chatted to Poppy about being a woman in such a male-dominated industry, navigating the ever-changing landscape of drinking culture, and her plans for feminist pub speed-dating! 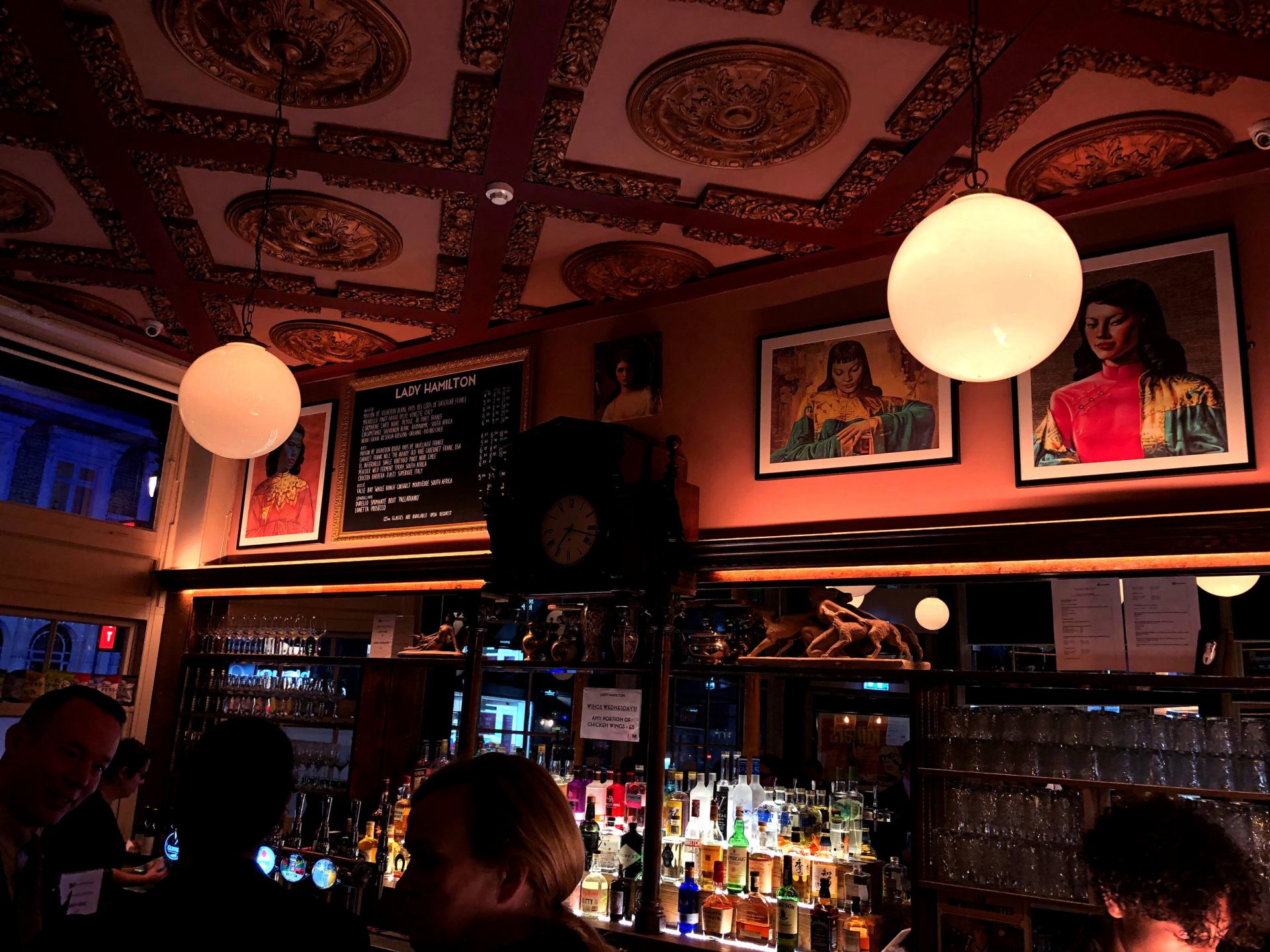 Hi Poppy, thank you for having me at The Lady Hamilton. How did you get to be here, managing this female powerhouse of a pub?

I was actually managing the bars inside the Roundhouse collectively with two other girls, there were a lot of bars and about 70 staff. But I used to work at the Pineapple pub in Kentish town when I was at university, and eventually, myself and my other half ended up running all three of their sites; Tapping the Admiral, The Pineapple and The Lady Hamilton. It’s basically like doing events but on a much smaller scale! I went from wanting to run music venues, which I still do with our venue space upstairs but now I’m more interested in the social space. I realised when I’m not running pubs, I’m not as happy!

Lots of pubs are closing down, so why do you think The Lady Hamilton is thriving?

We’re trying to educate young people to drink in free houses. It’s really great for the economy and prices can be better. Young people may not know that if you drink in certain chains, you might be supporting a political domino effect that you’re not aware of; that might be pro-Brexit or a certain party; you don’t know who the investors are. You don’t know where the money is going or how little the staff are being paid.

“If I had £1 for every time I’ve been asked: “Oh you’re a woman are you sure you know how to look after beer?” I could open another pub!”

Talking of where the punters’ money goes, I noticed the wine producers are all women! How do these small changes make a difference?

I had been treated quite badly in the industry, not by owners or investors or my bosses, but if a beer was dropped off or a beer rep came in and asked to speak to the manager, when the staff said it was me they’d say “What?! The woman?!” and I was just sick of it. The whole MeToo movement was happening and for that, the idea sprung to create this female powerhouse. Daniel Whiskin from Boutinot Wines specially created the list for me and I got the chance to go out and visit one of the wineries too which was fantastic. If I had £1 for every time I’ve been asked: “Oh you’re a woman are you sure you know how to look after beer?” I could open another pub! I was. I want to start the conversation, I want to get people talking. I get a lot of men bringing dates in here wanting to show off!

What other barriers have you faced with managing the pub?

In this male-dominated industry, I’ve had to grow quite a thick skin to put up with the misogynistic approach to female managers. Thankfully, there is a community of women who are kick-ass managers and I’ve found my place with them.

What or who else is your inspiration to keep going even when it’s been tough?

Penny Lown – my mum! She’s my motivation and inspiration. She said ‘If I give you an unusual name you should live up to it’ and Poppies are rare and wild. She nearly died four years ago from pancreatic cancer and she’s the reason I left Roundhouse and followed my gut; she’s the start of me. She brought me up single-handedly and everything I do is because of her. She’s fighting for government funding now to help others with their pancreatic cancer diagnosis because symptoms are often confused with IBS. You have to google her! 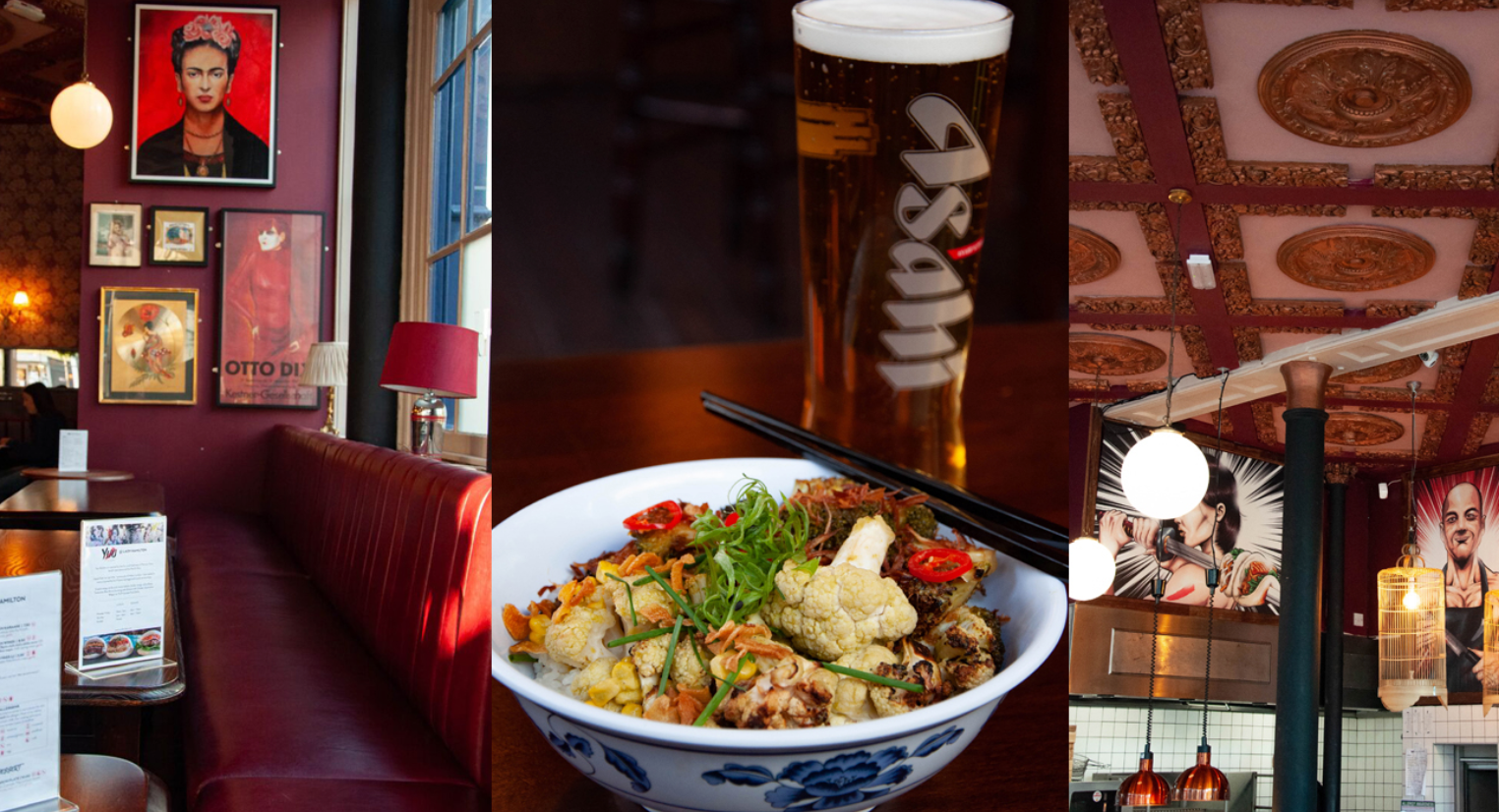 Tell us more about the feminist art on the walls at Lady Hamilton?

It actually all started with the artwork. Vladimir Tretchikoff, who was the first openly gay painter in Russia, paints women from around the world and I always wanted a pub with those paintings in. Then my friend CeCe from CeCe Designs did my Lady Hamilton logo, then my wine list was designed by my very talented friend Cressi and Elle did my website and social media. Before I knew it, accidentally this whole pub had been designed and built by women, and it was totally organic! Women tend to have that attention to detail and when you’re doing up a pub from scratch, that’s what you need.

In terms of pubs as a social space, and going out/ drinking culture in general, do you think it’s getting better for women? Do we sometimes live in a bubble or are things really improving?

It is getting better. Alcohol itself is becoming more unisex – men drinking gin and women drinking pints if that makes sense. The thing I notice is actually a lot more online dating/ dating apps; you get a lot of women waiting for men they’ve never met based on a photograph which is scary sometimes. I’d really love to see a bit more organic dating in bars that isn’t creepy or unsafe.

Talking of dating spaces – I notice you have Ask for Angela here and Ask for Clive which is the same scheme for an unsafe situation for the  LGBTQ community, have you had people have to use those? Do they make a difference?

I have had to use the Ask for Angela once in a bar I used to work in – we smuggled her out the back; it’s an amazing scheme and it is being used. Ask for Clive I got recently and is really important to me; there isn’t a specific LGBTQ+ friendly space around here, and I’ve got a few burlesque nights coming up here where I want to bridge that gap between Soho and Kentish Town/Camden. Just because there are specific gay bars doesn’t mean every other bar should be a ‘straight bar’ – they should feel safe everywhere. I’m trying to create that ‘everything and everyone space’. I put those posters up and a group of 30 LGBTQ+ people came from a pride film screening and they googled LGBTQ+ friendly pubs in the area and I was the only one that came up – I was chuffed to bits

I know who Lady Hamilton was (Admiral Nelson’s lover) and that’s who the pub got its name from, but when did you discover her and why did you choose her?

Ah well, it’s a nice story and a cheesy story. My husband managed the pub called Tapping the Admiral named after Admiral Nelson, and I’m in love with him like Lady Hamilton was in love with Nelson. But more than that, she was a sex worker and this building used to be a brothel. The owners of the three pubs (The Pineapple, The Lady Hamilton & Tapping the Admiral) realised there are no pubs within a 5-mile radius, in fact not that many pubs anywhere, that are named after regular women that aren’t queens! She was a local, partying girl – my kind of feminist!

So what feminist and LGBTQ+ events have you got coming up?

We’ve got more comedy coming up, I’ve got some exciting drag nights booked in, private parties and a University Challenge style drinking quiz. I want some more private intimate gigs. I’ve had yoga up there, a baby rave, and a supper club called The Pickled Pear, but I also want to get into feminist speed dating. If anyone runs speed dating, get in touch!

How can we encourage more women to get involved in pubs?

It’s hard. There are a lot of misogynistic views, but you don’t have to be laddish [to do it]. Unfortunately, I’ve not worked in a place where there’s not been sexual harassment from customers to female bar staff, and that can be so off-putting. The customers have to change, but I’ve seen it happen to male staff too. This doesn’t happen every day and most of my customers are lovely, but it does happen and female staff think about what they’re wearing to work which isn’t fair. Bosses need to be well educated on this stuff; a happy staff is a happy pub, and a key part of that is understanding your staff’s situation and taking on board what it’s like, male or female, to be harassed at work. Weeknights, it’s a lot of male customers [that come in] so women have to feel more comfortable at work if you want them to work in a male-dominated industry. The law is forever changing so educate yourself and keep up.

This place next year, what would you love to see?

I want to see people of all sexualities and genders come to a whole host of different events and I want more female brewers on my taps, so any female brewers get in touch! I just love being approached by people who want to use the space – this is a public house and I want it to be used

Finally, what would you say to your sixteen-year-old self if you could tell her anything?

I would tell any teenager that you don’t just have to have one career, you spend a third of your life at work and I’m lucky that I now enjoy it. I had a lot of people tell me this isn’t a ‘proper career’  but I’m one of the happiest people I know out of my friends and family – I love my job. Don’t let anyone tell you that something isn’t a proper career or it’s too male-dominated to crack it; don’t be afraid to do it if it makes you happy.