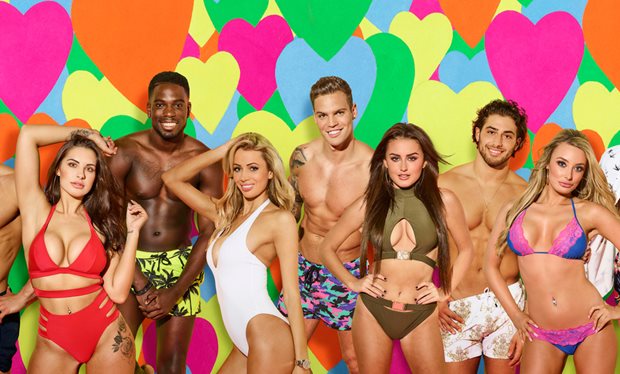 Love Island is literally trash. Actually it’s worse than trash, it’s the bin juice at the bottom of a trash can. But then why can’t I, and millions of others, stop watching?

I know dozens of intelligent women who are sucked into watching Love island 6 out of 7 nights a week, for the majority of summer. This week for example I cancelled all my plans to watch. Legit cancelled a real life date in place of watching other people ‘date’. I then spent the hour post-Love Island scrolling twitter for the best memes.

Love Island is shallow and perpetuates one very narrow type of beauty. When watching it’s very clear that the show isn’t diverse in the slightest. The set-up is heteronormative, all the contestants are cis, and for the most part it’s very white. Everyone on the show, especially the women, have one body type- slim, toned, tall and there’s a hella lot of plastic surgery. They are all stunning, and I’m not shaming this look at all, but only showcasing only one body feeds into the idea that there’s a ‘right’ and ‘wrong’ way to look.

Love Island normalises cheating, possessive behaviours, and the word ‘slut’ is thrown around in a way that makes me feel like I’m back at school in 2010. This week, for example, Dom treated having sex with Jess as a ‘challenge’ and a competition. Noting that she’d cave, and he’d ‘win’. Then Amber was shamed by Kem for sleeping with two guys in one night, but in the same breath congratulated another contestant for having a foursome. We all know this terminology is extremely damaging, sexist and not sex-posi in the slightest- but when it’s on Love Island, for some reason, we turn a blind eye.

It’s harmless, comical TV, right? We shouldn’t read too much into it? If everyone doesn’t take it seriously, then there’s nothing wrong with all enjoying a little bit of light viewing? RIGHT? Part of me wants to take it with a pinch of salt. Just enjoy the utter ridiculousness of a show where people get in relationships after 24 hours. But, another part of me worries that the 14-year-old girls out there tuning in won’t get the satirical nature. They’ll think that it’s okay for men to have different rules than women when it comes to dating, sex and relationships. That they have to have DDs, a size 0 waist and a Kim-K bum to be ‘picked’. That types come down to nothing but being blonde or brunette. That it doesn’t matter how intelligent or successful you are (Camilla), or kind-hearted (Marcel), if you don’t look like Ken and Barbie, you’ll come in second.

Reality TV is best described with a car crash metaphor. You’re driving past, and although you know it’s a disaster, you look anyway. You just can’t stop staring. So, let’s be honest, we’re going to keep watching a show that is complete crap. However, I’m going to try a little harder to consciously view. Awareness of the craposity is key.