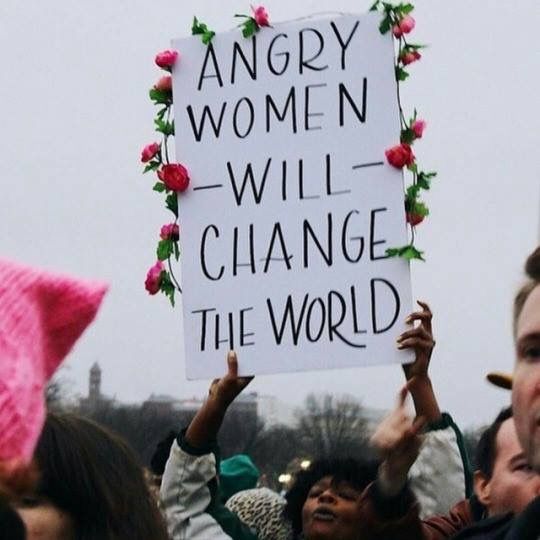 Most of the time, upon seeing pictures of marches across the world, I’m left feeling immeasurably more inspired than I did before. Seeing whole families, whole communities come together because they believe in something better than what they’re getting is awesome in the original meaning of the word. I believe that hope is an active thing; hope in a person is someone who stands up tall ready to meet whatever’s coming, and who doesn’t give up at the smallest hiccup. If I could travel back in time and tell 10-year-old me about the women’s marches, about Angela Davis, Natalie Portman, and Gloria Steinem sharing a stage together, about how resistance has become part and parcel of daily life nowadays, I’d be astounded. Marches can be a place to refuel, to find solace and solidarity where you thought there was none. They can be a place to celebrate all we’ve achieved thus far.

Yet, simultaneously, they can be exhausting. They can be debilitating. Every step you take can feel like it has the weight of every silenced voice precariously balanced on it. There’s a lot of pressure to show up and be counted, and sometimes when the day comes, there’s a heaviness that can’t be shaken and it stops you from setting foot outside.

So you stay in. You don’t show your face so you can take care of yourself instead. Then, like some cruel joke, the guilt and anxiety barge in through the door without even wiping their feet on the doorstep. When it comes to activism, it can sometimes feel like a “pics or it didn’t happen” situation. Like everyone’s measuring your feminism based on whether you were at the march or not, because if you didn’t post about it on Instagram, were you actually there? Am I right?! It’s hard because marches (tied with voting) are the thing where the body count really matters, so it’s easy to feel guilty for not going, and it’s easy to let yourself spiral because of that feeling.

“There’s a lot of pressure to show up and be counted, and sometimes when the day comes, there’s a heaviness that can’t be shaken”

I remember going to an event – it wasn’t even a march, it was much smaller – and the next day I could barely move off the sofa. I felt rotten, and then I felt like a bad feminist for not feeling energized and ready to carry on fighting the good fight. The anxiety I felt was overwhelming. It was kind of like an introverted hangover; I’d been extremely extroverted all day prior, and so all my energy reserved for talking to people was spent just like that. I knew this, but the guilt was still there as I chastised myself for going knowing I shouldn’t have gone, and then, I chastised myself for considering that I shouldn’t have gone when it was for a cause dear to my heart. It’s a vicious cycle, and I hope I’m not the only person who falls victim to it. In fact – I know I’m not. There are so many people out there who are introverts and have anxiety like I do and perhaps force themselves into doing extroverted things for the sake of showing up – for the Insta pic to prove they went – when really, we’d all have been better staying at home and focusing our patriarchy-directed-hate-fire elsewhere.

The thing is, not everyone’s cut out for protests and marches, and that doesn’t mean we chuck out marches until we find something that literally accommodates everyone. It just means that there will be some people who don’t go to the march and would rather do something else instead, whilst everyone else who can takes to the streets. We have to question whether we’re actually being useful by showing up with nothing to say in that specific capacity, and we have to question if there are more productive things some of us could be doing.

I can’t remember who said it first, but I remember hearing that feminism is like a patchwork blanket; everyone makes a patch and then we sew it all together and then throw it over the patriarchy. It’s okay if your patch is something completely different to someone else’s patch – in fact, that makes it even better! The more ground we can cover, the more chance we have.

“There is more than one way to be an activist.”

There is more than one way to be an activist. Protests are incredibly useful and effective because they get the whole country – if not the whole world – talking. Disruption is powerful. Think about how many countries the women’s march reached – people took to the ice in Antarctica to protest institutionalised discrimination. Antarctica! Isn’t that crazy?! The potency of this is not lost on me at all. Yet still, I say there is more than one way to be an activist. As is the case in any scenario, most work is done behind the scenes. It’s untangling knots you see every day; in subtle gestures and comments, in talking about the elephant in the room, in following by example, and in tiny acts of courage – that eventually add up. Sure, the march is the big day where people show up with their speeches prepared, but sometimes you’ll learn more from the people sitting beside you on the sofa watching telly than you will from the people stood on a stage waxing lyrically, and this is fine.

I write all this to reassure you that: “my anxiety won’t let me” is not an invalid excuse. It’s a perfectly reasonable one. You’re allowed to channel your energy into something that would be more constructive and fruitful for you. Maybe you paint the banner and someone else takes it to the front line. Maybe you’re the one telling everyone the make sure they make some time and space for self-care afterwards. Point is, we have to use our strengths, right? So, play to your strengths. And don’t feel bad about what you can’t do. There are enough people who can do what you can’t, and it’s only you who can do what you can.

Your patch is enough, and you don’t need to exhaust yourself getting a cute picture of it to prove to yourself that you’re an activist.