It’s been a long time since I’ve seen a performance that has made me feel quite this much. Sarah Milton’s Tumble Tuck is a must watch for any young woman navigating their way through life. Actually, it’s a must watch for anyone. Sarah’s writing and acting is brutally honest, confronting, hilarious, heart-wrenching and empowering. There are moments in Tumble Tuck that you find yourself switching from near tears to belly-laughing in less than 10 seconds. Discover more about Sarah in this edition of GRL Talk, below… 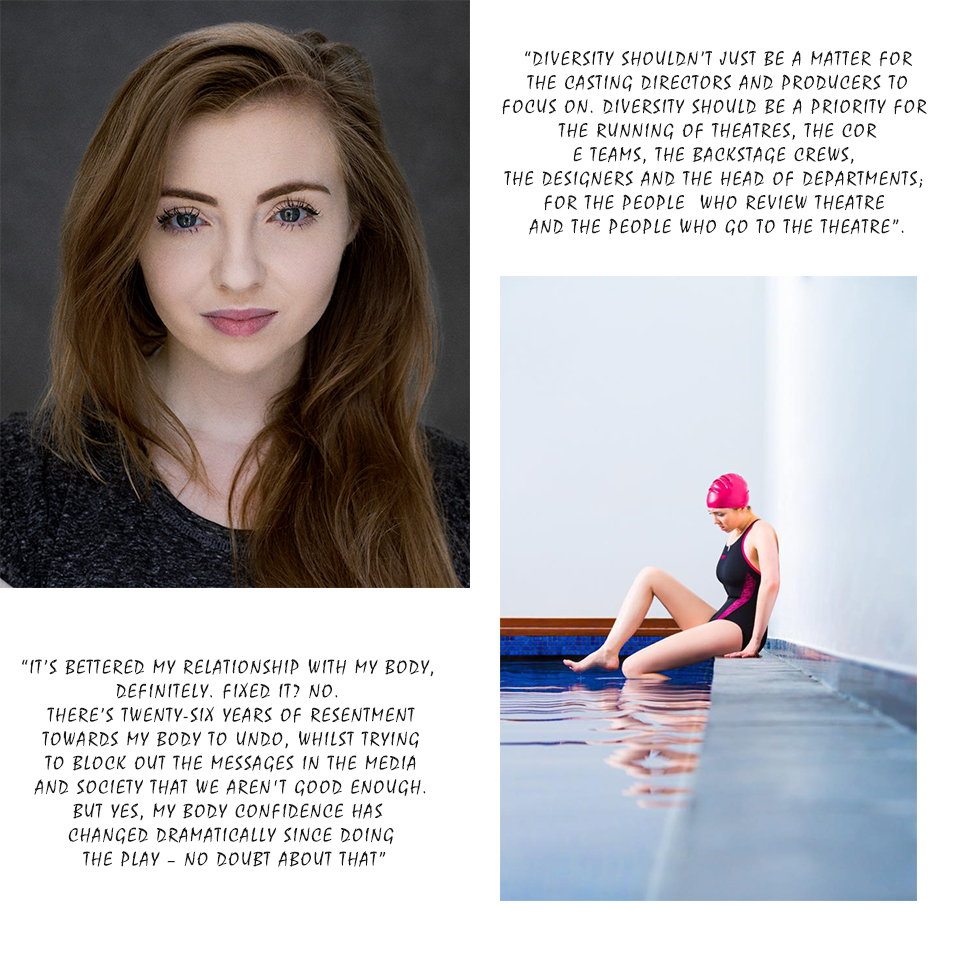 Hi Sarah, tell us a little about yourself for those who might not know!

I’m twenty-six-year-old playwright and performer. I grew up in West Sussex with my Mum and my brother. I live in Brighton now with my boyfriend and doggy. I’m currently obsessed with Queer Eye and Crazy Ex-Girlfriend on Netflix, and I could eat Thai food all day.

We can’t recommend Tumble Tuck enough, it truly blew us away. What was the inspiration behind creating this?

I’d moved back South, in with my Mum a few months earlier before I’d started writing Tumble Tuck. I’d been diagnosed with a panic disorder in 2009 and it had started to take a hold of me again. I was a mess; emotionally and financially. I’d been working 50+ hour weeks in London. Eating cheap, shit food to survive. I was depressed and overweight.

My mum suggested we try going swimming to get my weight down and do some exercise together. In my head were thoughts like “Must get thin, must lose weight, must get fit, must make self smaller.” Being in the water was a punishment toward my body. But then the serenity of being alone within the confines of the pool kicked in. Back and forth, up and down. It became therapy without me realising it. And then I got good, really good, and my speed was decent!

A local team came in one day in the lane next to me (Mum and I called them “The Triathletes”) and I found that, in comparison, I wasn’t a good swimmer at all! They were slim, strong and powerful in the pool – for every length of my swim, they did three. I left embarrassed and feeling gross. I didn’t go back for a couple of days. I wrote about it instead in the form of a play. I wrote what it felt like the be in the water. I wrote the race Daisy experiences in Tumble Tuck, and it out it all came!

Daisy’s journey is so relatable. The material touches on so many issues that are integral parts of growing from a girl to a woman – mother-daughter relationships, body insecurities, friendships, first loves, class, abuse – was it a conscious decision to make Tumble Tuck so multi-dimensional?

I don’t write very consciously, I splurge and tidy up later. I’ll write the first draft of something in a couple of days and then keep returning to tweak for a few months. So, no, it wasn’t conscious and the clarity of those thoughts and narrative moments found their time and space predominantly in rehearsals with the expert guidance of the show’s director Tom Wright. We’ve been playing with the script and Daisy’s journey for four years now, she’s developed so much in that time from the first draft/outing of her. 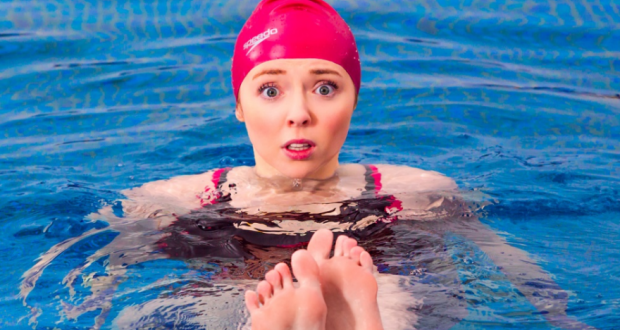 Getting up on stage in just a swimming costume, with no other actors and minimal props takes courage! Has your body confidence changed from the first performance to now?

My body confidence has totally changed. The first time we did a showing of Tumble Tuck (Wilderness Festival, 2016 with The Old Vic New Voices) I asked Tom if I could have a swimming costume with short style legs. He asked me if he thought Daisy would have owned one of those. The answer was no, and I was petrified. Pubic hair! Cellulite! 250 people are going to see those things on me. But it was fine, nothing awful happened. No one commented on anything like that afterwards.

By the time we got to our Edinburgh Fringe run, I was more concerned about being cold on stage then I was about my body being on posters everywhere! Performing Daisy is an out of body experience for me though, it doesn’t feel like my body when I’m on stage. But that’s not to say doing this play has beaten my body hang-ups, which I still get a lot.

It’s bettered my relationship with my body, definitely. Fixed it? No. There are twenty-six years of resentment towards my body to undo, whilst trying to block out the messages in the media and society that we aren’t good enough. But yes, my body confidence has changed dramatically since doing the play – no doubt about that.

What are you passionate about changing in the theatre industry?

I think the theatre industry has a real problem with representation. I’m not just talking about in terms of just skin colour either, although of course, this is just as important an issue. More LGBTQIA+ stories, working-class voices and females of broader backgrounds/ethnicities need to be shown on stage, yes, but backstage and in pre-production, this must happen too.

Diversity shouldn’t just be a matter for the casting directors and producers to focus on. Diversity should be a priority for the running of theatres, the core teams, the backstage crews, the designers and the head of departments; for the people who review theatre and the people who go to the theatre. For too long the general experience of the theatre has been stuck in a box of privilege and it’s time we changed that collectively.

If you had to sell Tumble Tuck in 5 words to our audience, what would they be?

Finally, the question we ask everyone in GRL Talk! What advice would you go back and give your 16-year-old-self?

Keep up with all things Tumble Tuck HERE